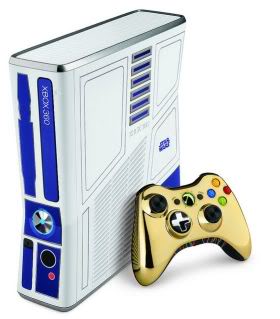 Maybe you’ve heard about the new Kinect Star Wars game for XBOX that’s expected to train up a whole new generation of padawans by getting your kids to jump all over the living room. But have you heard about the wicked cool Star Wars Bundle that’s like having your own droid buddies along for the ride?

Oh, except that one is an XBOX console. And one is a controller. (Mercifully, this means that as a controller, C3PO can’t talk.)

You know we love XBOX. And Star Wars. So our geek is totally piqued by the limited edition XBOX Star Wars Bundle, due out this holiday season in conjunction with the release of the much anticipated Kinect Star Wars video game. The console was designed to resembled everyone’s favorite mech droid, R2D2, complete with Artoo’s loveable beep-boop sounds and a secret surprise the first time you open the disc tray.

The wireless controller (which isn’t necessary to play Kinect Star Wars, BTW) is shiny gold with wires, just like our old friend C3PO. And the Kinect sensor is the first one ever in a custom color–white, to match the console. Also included are a wired headset for trading taunts with Wedge Antilles, the Kinect Adventures game, and a 320 GB hard drive.

Preordering is recommended, since the edition is limited, and it’ll run you around $450, which is a little more than the regular, boring black bundle. Which, when you think about it, kind of resembles Darth Vader. So if you’re cool with the Empire, you know, that’ll be fine. But if you’re part of the Rebel Alliance, these might be the droids you’re looking for. –Delilah