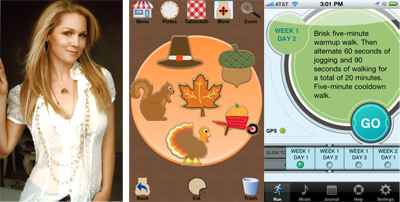 Oh Appy Day! gives you the scoop on the coolest apps from some of the coolest people anywhere. This week, we’re thrilled to welcome cool mom of 3 and actress Jennie Garth, whose kids like some of our own favorite apps!

My kids love Cookie and Cake Doodle. They love to bake and this app lets them do that on the go. And even though they don’t get to eat the goodies, they still have a blast making them.

Personally, I love the c25k training app. It has me running three days a week, which I never thought was humanly possible for me. – Jennie

Jennie Garth has starred in shows like Beverly Hills 90210 and What I Like About You, and has served as a spokesperson for the American Heart Association. You can catch her voice in the new DVD release “A Christmas Wedding Tail” out December 6.