Peg Solitaire – turns out it’s got a cooler name than that. 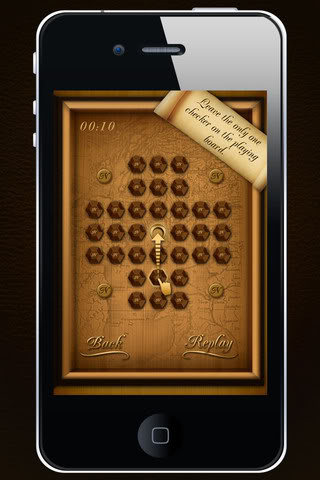 If you’re loading up on apps to keep the kids entertained on car trips and rainy days, we’ve got a fun new one that’s actually not new at all. In fact, I think it’s a few centuries old.

Besides, how could I not try the game that’s huge in Denmark?

The Napoleon app
offers three versions of that game I always thought was called Peg Solitaire–the
one where you jump your own checkers one at a time, in an attempt to
clear the board. Evidently it’s called Napoleon, because he invented it. Maybe during all that downtime in Elba.

I haven’t mastered it just yet, and my six year-old has gotten down to
5 at her best–but something tells me soon enough she’ll have it figured
out. If only by accident. When she does, she can move to one of the other two board layouts. The free version (linked above) of Napoleon is beautifully done, but loaded
with banner ads up top. Even though they’re high quality, if you don’t
want kids clicking, fork over the $.99.

It’s a nice addition to games like Unblock Me which help develop logic and problem-solving skills more than say, the decorate your own cupcakes app. –Liz

Find Makro’s free Napoleon app and a $.99 ad-free version for iOS from iTunes.