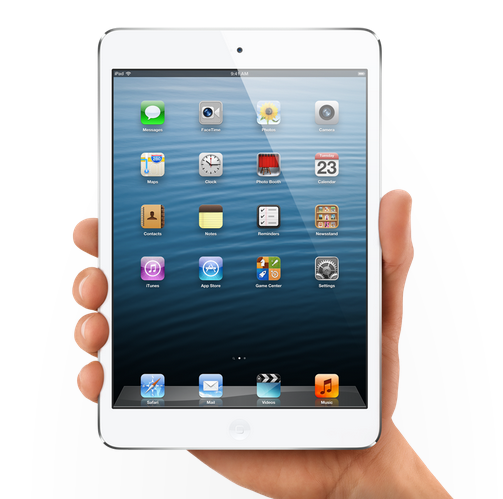 As expected, today Apple launched a bunch of new gadgets, including the highly anticipated iPad Mini and the big surprise, an iPad 4th generation.

But those weren’t the only newsworthy products Apple launched that we think might be of interest to you. Here we rounded-up the best of what’s coming from Apple, along with the scoop on the new iPad with Retina Display and the iPad Mini. Isn’t it cute?

Before we get to the huge tablet news, we should mention the brand new 13-inch MacBook Pro with Retina display (below) that’s pretty exciting if you’ve been wanting all the new bells and whistles of the recently-launched 15-inch MacBook Pro but don’t like the size and the price. This new notebook is significantly thinner and lighter than the previous 13-inch MacBook Pro and is much more environmentally friendly, with a Mercury-free screen and PVC-free hardware.

If you’re in the market for a new desktop, there’s a new iMac that’s beautiful and sleek, even wall mountable, and features the new Fusion Drive, which is a hybrid flash and HDD. Read: Allows you to save space on your computer and still easily access files, photos, and apps. Smart! And did we mention it’s pretty? So pretty!

The biggest surprise goes to the 4th generation iPad, which shocked many tech folks, including us, especially considering Apple just released the new iPad only six months ago. And while it is faster now thanks to the A6 processor, and has the new Lightning port which will allow you to use their new USB adaptor and SD card kit, and a retina display, there isn’t a huge difference between this one and the iPad 3 (aka the new iPad). So, don’t be too bummed if you just bought one! However, the newest iPad, or iPad with Retina Display as it’s being called, sounds like it will be much more useful for folks who use their iPad as a laptop replacement.

And finally, Apple launched the highly anticipated iPad Mini, a 7.9 inch tablet that really is a smaller iPad, and is very light and super thin; yes, you can hold it in one hand if you so choose. You’ll get a Facetime HD camera, as well as 5 megapixel back camera, and it will work on the LTE network. Thankfully, all the apps made for the iPad 2 and newer will work without an issue. Pricing starts at $329 for the 16MG, higher than Amazon’s new Kindle Fire HD, which actually has better screen resolution.

Now if you’ve been waiting for a smaller sized iPad and are anxious to get your hands on the iPad Mini, you can pre-order it this Friday, October 26, and have it on November 2. We can’t wait to see how it compares to the slew of new Android tablets out there and if it’s really worth the money and the hype. -Kristen

Will you be ordering the new iPad Minior the iPad with Retina Display? We’d love to hear your thoughts in the comments!