Leave it to Disney to make the history of 44 Presidents (dare I say?) fun 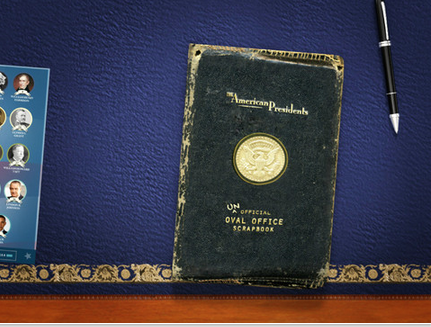 Today’s Inauguration gives us a great opportunity to talk to the kids about the role of our President and some of the more interesting and colorful figures to have graced the Oval Office. But, if you slept through history class as much as I did, you may also find it hard to remember the details and dates of all 44 presidencies. Which is where an incredibly smart app for the iPad will come in very handy.

And, unlike my old history classes, there is no way the kids will sleep through this.

Disney American Presidents app for the iPad takes you through the Unofficial Oval Office Scrapbook. Flip the cover and you’ll find a 2-page “spread” for each of the Presidents.

Though the pages include all the important stuff—like the dates of their presidency, political party, and Vice President—-it’s the “fun stuff” that makes my kids laugh–and probably will help them remember the individuals better than rote memorization. Take Millard Fillmore, who Queen Victoria once called the handsomest man I’ve ever met. I also love the Sound Bite function which lets kids hear some of each President’s most famous words, often in their own voice.

But what really keeps my kids coming back to this app again and again is the video on each scrapbook page. Each president’s video is a few minutes long, made up of cartoons, photos, and fun graphics that really do inform and entertain at the same time.

With content written for kids from grades 3-8, keep in mind that more difficult subjects—like President Clinton’s affair or the role of terrorism in our society–are discussed, though in a way that I thought was age-appropriate given the audience.

I love the little details too, like how the background music changes as you work through the eras, from the patriotic marching songs for the first four presidents, to the Big Band sounds of the 30’s, to the rocking horns of the 50’s and 60’s. And having been developed with a producer of The Daily Show and The Colbert Report, the humor and point of view in this app are right up my alley, though also surprisingly balanced. This is no Disney World Hall of Presidents, that’s for sure.
Please keep in mind that with all the touch-screen features and videos for each president, the app itself is a big file, over 1 gigabyte. Probably due to its size, I had to reload the app a couple of times before it would work, but now that it has loaded entirely, I’ve had no issues with it. If only politics were so smooth. –Christina
You can download Disney American Presidents for the iPad at iTunes.