The coolest trends at CES 2013 – Audio gets more portable 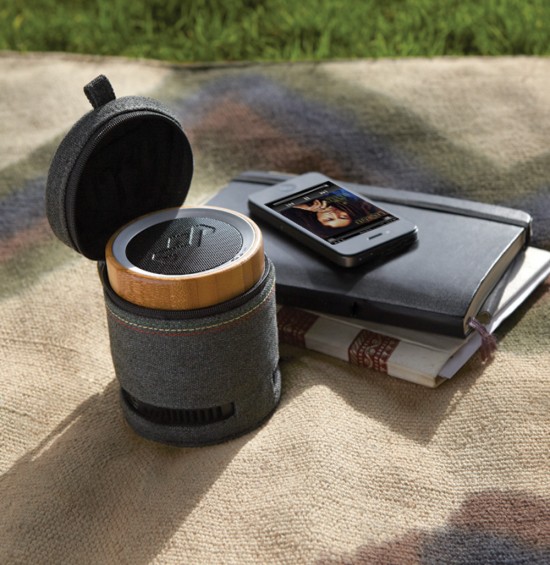 After spending a few days immersed in tech at the CES show, it’s clear that small, portable audio devices are the new black. The big boombox of the 70’s has spawned a ton of lightweight, portable speakers a whole generation later, mostly powered by Bluetooth.

Here, a few standouts from the show. They’re small (clearly no one misses carrying music on their shoulders), they sound great, and a lot of them are getting increasingly affordable.

House of Marley makes amazing eco-friendly (seriously) audio systems and devices, and the Chant Bluetooth Portable Audio System is no exception. It’s just $99, is made of sustainable bamboo and recycled aluminum, and comes in a cool carrying case made from a proprietary blend of recycled PET that looks and feels a lot like denim.  There’s also a regular Chant Audio System that skips the Bluetooth and runs on a rechargeable battery that gets you about 6 hours of listening time–for just $59.99. Really amazing deal for great sound from a great company.

Pure Audio was one of my favorite finds of the week. I’ll talk more about their full line later, but I was smitten with their Jongo Portable Wireless Speaker, just out in the last couple of months. It offers gorgeous 360-degree sound from a very attractive little speaker. You can use it on its own or combine it in a network (as with a system like Sonos), all connected through your Wi-Fi network. You can also use Bluetooth to stream from your device right to a single speaker. They’re not cheap but neither is the sound; you can pre-order them now for about £149.99 with the changeable color grills for a few pounds more.

Crosley, which can do no wrong in our eyes, has a ton of audio fabulosity coming your way including the Crosley Seul, a compact, Bluetooth Ready AM/FM portable radio that also streams MP3s and retailing for about $129. How amazing is that mid-century look and the gorgeous colors? I will be needing one, of course. Keep an eye out at Crosleyradio.com.

The Zooka Wireless Speaker operates on Bluetooth, clips to pretty much any iOS device and comes in a ton of great colors. It’s lightweight and durable, and was a favorite of ours for sure. (Click through for the full review). They’ve really reinvented what a portable speaker can be, and how it works–this one doubles as a tablet or phone dock.

Beats is still going strong with the Beats Pill, which we introduced to you last year. I’m digging the “Pretty Sweet Pill design, which is a collaboration with Girl & Chocolate Skateboards. But don’t let the angle in the photo fool you; the sound is big but the Bluetooth speaker is only 7.5 inches long and weighs just 11 ounces. Retail $199.

Psst…their other big announcement? Beats is launching their own streaming audio service later this year called Daisy, with none other than Trent Reznor as chief creative officer. Our ears are open.

The Jam Wireless Bluetooth Speaker from HMDX Audio rings in under $49.99 with candy colors (or jelly colors?)  that make it great for trips to the park or impromptu dorm room parties. You only get about 4 hours of audio off a charge, but the 30-foot range is nice. They’re definitely going for a young market here so I’m not sure the audio is in Bose territory–but neither is the price.

Rapoo has got a swell little (really, it’s 2.8″ tall) Bluetooth mini speaker coming out with a similar price and colorful/shiny vibe as the Jam, but a way more sophisticated look and packaging. There’s even a silver if you prefer your tech on the subtle side. What I really like is that you can toggle between audio listening and speakerphone calls, making it smart for a home office. It’s also compatible with iOS as well as Android and (yep) Windows 8, which I think you’ll start seeing more of too.

How awesome is the Jawbone Jambox? So awesome that 8 zillion companies we saw are now making their very own versions. (Does this photo of Polaroid’s new portable speakers look like anything you’ve seen before? We thought so too.) I haven’t gotten a sense of the quality yet, but keep an eye out for similar ones from a lot of companies like HDMX Audio, Logitech, and Jabra–the latter of which I’d expect to do the best job with them. We already love their Bluetooth headsets.

We’ll be covering our favorite CES 2013 trends all week–keep an eye out!