batteryPOP: A safe online entertainment network for kids that they can customize themselves. 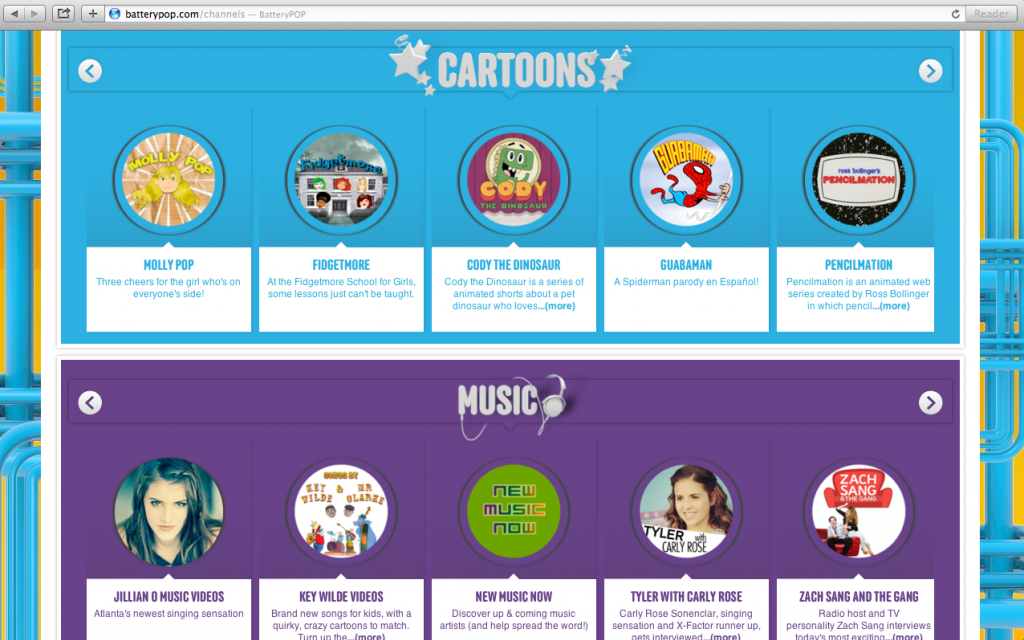 If you have kids old enough to play on the internet on their own, but not quite so old to do it without you wanting to be over their shoulders the entire time, you’ll be as happy as I am about batteryPOP, a new online entertainment network where your kids get to be the programmers of their own content. Only it’s all appropriate for them–with apologies to insane YouTube commenters.

batteryPOP is the brainchild of two former Nickelodeon vets, and it has that fun and slightly irreverent feel that Nickelodeon is so famous for. New original content is uploaded regularly in a handful of channels, including Cartoons, Music, Comedy, Video Games, Action & Adventure, International, and what parents will probably appreciate most, Science & Math. (Though why does that have to be down at the bottom?)

Most of this content is short form—under five minutes generally. Check out original animated shows Cody the Dinosaur and Lory which are pretty fun. I also like This Week at NASA and Hubblecast which aggregate the latest videos, images and news about our space program. Though your kids may be most excited for the music videos, or the tutorials for Minecraft and Skylanders. It’s also nice to see the inclusiveness of an International channel.

The thing that makes the channel so appealing to kids is that they get to POP (or save) the shows and videos they love by clicking a little lightning icon on the show’s page. It helps customize their experience, so they see more of what they like and less of what they don’t.

And by they way, batteryPOP is triple checking each video to make sure it’s kid-safe, and the site is of course COPPA compliant. So that puts me at ease when I walk away from the computer or iPad and let the kids have at it.

There are a few criticisms:  No search bar on the homepage makes it really hard to go back and find that show your kid wanted to watch without scrolling through all the channels, however they are working to include one in a future update. And while the concept for this site is great, at this point it’s very early in development. The site has about 30 creators and 60 hours of content so far. Which is a lot for a launch, but not so much when your kids want to binge watch 10 of the animated shorts.  Still, the depth of programming is nowhere close to a site like KidZui, which also focuses on kid-friendly content.

On one hand, I like that batteryPOP has more original content and fewer media brand partners. On the other, kids KidZui is going to have more shows and brands your kids are familiar with which could be more appealing to them.

Still, batteryPOP could grow to be a really terrific option for preteens who want control over their own entertainment and just love to be experts. For them it’s a constant process of ranking everything—from teachers to fashion to after-school activities, and especially entertainment: This show is so lame; that show is so rad. Funny how they’re using the same language now that we used in our own middle school days.

batteryPOP is available online through your browser, but is optimized for tablets. They’re currently working on apps for both iOS and Android.