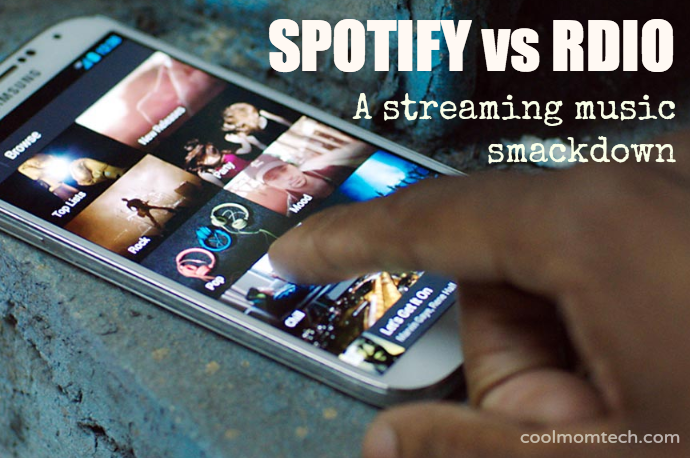 It can sometimes be difficult to keep tabs on the dizzying array of digital and streaming music services and choices. Add on top of that free vs. paid services, pricing models, and mobile vs. web or desktop options — and well, are we confused yet? So we put together this comparison of Spotify vs. Rdio,  to help you make make sense of what their strengths and weaknesses are.

We have already served up a brief comparison of the top streaming music services, but this should give you more info on two of the very top services if you’re waffling.

THE BASICS
First of all, both are on-demand streaming music services, meaning you can play any song in their catalogs whenever you want. They are not services like Pandora, which only plays songs for you in a radio manner–meaning they choose the songs based on what they think you’ll like. However, both Spotify and Rdio do have Pandora-like radio options if you are in the mood to have someone play the music for you.

Both services also have free and paid models. And they both also are socially driven networks, allowing you to link up with your friends or those you want to follow (stalk?) for their great musical taste.  In addition, if you use the desktop client for either service, you can import your iTunes library for availability online (unless the service doesn’t have a specific song in their catalog). Here’s how the services differ:

SPOTIFY
This may be the music service that most of us have heard of by now, since it launched in 2008 and hit the US in 2011. It currently has a music library of over 20 million songs and it easily integrates with Facebook and Twitter for easy music sharing over social media or just within Spotify itself. You can use it right from your PC or mobile phone when you’re out and about, which is always great.

If you opt for the free service, [corrected info] that means you’re stuck with brief ads between your Elvis Costello tracks and can listen to all of your playlists or an artist’s catalog  on your mobile devices in shuffle mode. The alternative is the paid, Premium version of Spotify for $9.99 per month, which allows you to listen to anything, anywhere that you’ve got your account open all ad-free. Paid users also can sync music for offline listening, so if the wifi at your gym stinks, you can still have your guilty pleasures-get me through this run-workout playlist.

The Spotify interface looks similar to iTunes, and it operates almost entirely on the playlist model — meaning you build playlists based on music you like and sort your music that way. You can organize playlists into folders as your collection grows, something I desperately need to do. 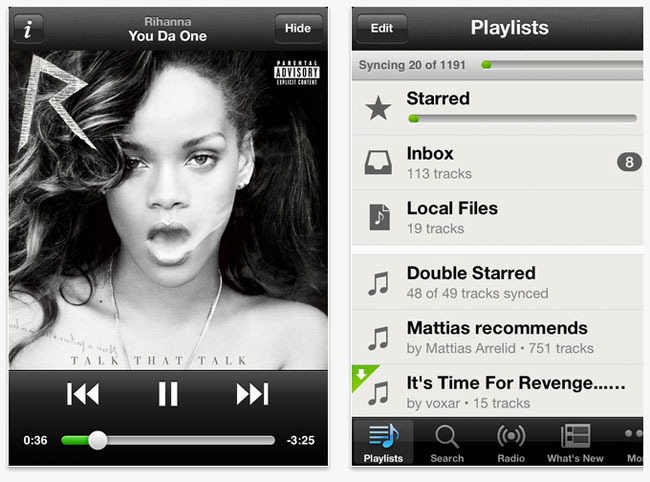 Big collections can present some problems in Spotify as it isn’t optimized for huge catalogs of music that you keep growing year after year. But that leads me to what I think is the biggest issue for an otherwise amazing music service: the interface is older and clunkier and needs some updating, especially now that people are building big collections of music over time. Still, their catalog is generally considered a bit superior to Rdio’s, even though you still won’t find AC/DC or Peter Gabriel on either. [Correction: Led Zeppelin is now exclusively available through Spotify.]

That said, I really like the upsides of the service, including more opportunities to see what your Facebook friends are listening to, considering so many of us are already pretty invested in our social networks. (Facebook addicts, raise your hands.)

Bottom Line: Spotify is a great, easy-to-use service with a huge music collection and millions of users to follow and share with including your own friends. The interface can make it harder to manage large collections of music, but as a newbie it should fulfill your basic listening needs, especially the paid mode. Unfortunately there’s no added value for families who want multiple paid accounts since you each need your own or you have to share.

RDIO
Rdio is a slightly newer player in the streaming music market, launched in 2010 by the co-creator of Skype. Its model is very similar to Spotify in that you can play music on demand or use the radio option if you don’t feel like playing DJ yourself. The free service has limited, short ads occasionally between songs and won’t let you sync music for offline listening.

I think you will be very pleased with both the web and mobile interfaces. (There is also a lesser known desktop client for Rdio, which is helpful if you want to import your iTunes library.) They are clean and intuitive and, in my opinion, make a large collection much more manageable.

The social capabilities are the same as Spotify, with the option of following other users and sharing music via social networks. I also really like the radio option which allows me to select my “Kristin FM” station so I can hear music based on my entire collection (not just one artist or song). But how it can create a cohesive station with choices ranging from Bon Iver to Broadway show tunes to the soundtrack of  Frozen is beyond me. 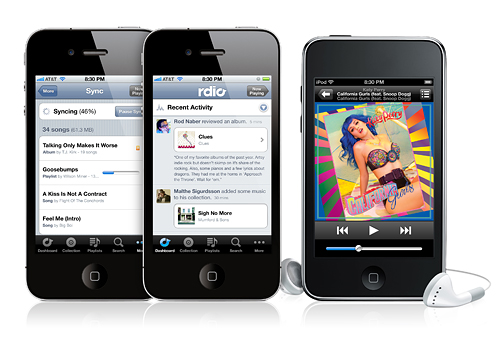 The personalized station also goes one step further and allows you to choose whether your radio station picks familiar or adventurous choices, and that’s awesome for discovering new music as opposed to just listening to the same old same old. As a mom, I’ll take that adventure anywhere I can get it.

I really like that there are different tiers of paid models. For $4.99 a month, you get ad-free web streaming, though not on your mobile device. For $9.99 a month–comparable to Spotify–you can add your tablet or phone to the mix, as well as the ability to sync music for offline use. And what I find really great is that for $17.99 a month you can get a two-person family plan with unlimited web and mobile ad free streaming, should you want multiple accounts. [Edited to add] You can also subscribe to the free version, which is more or less the same as the AM/FM ad-supported radio you are used to .

A three-person unlimited plan is $22.99, with each additional person at half price, if you’ve got frequent music listeners. I think that’s best for families with older kids who don’t want to share accounts–or have coworkers think you love Miley Cyrus when it’s actually your daughter listening.

Although really, it’s more likely that it’s your daughter who doesn’t want her friends to think she’s listening to The Eagles.

Bottom Line: If you are willing to make the jump to a new service, Rdio has a similarly sized music catalog as Spotify and a superior interface for both mobile and web use. It’s a terrific way to really grow and maintain your complete music library. You will give up some of the social sharing that Spotify’s large user base provides and you will have to rebuild collections and playlists if you have already spent a lot of time building them in Spotify. But you will be rewarded with multiple fee models that are great for families with multiple users.

Check out the free models of Spotify and Rdio to get a sense of which is right for you before you invest.

Kristin is a mom of 2, professional photographer, a dedicated home cook, and a lover of tech, indie shopping and all things vintage. Yeah, she's busy.
Bio
Twitter