Google’s Made with Code: Watch our girls take over the world. (Then watch Icona Pop.) 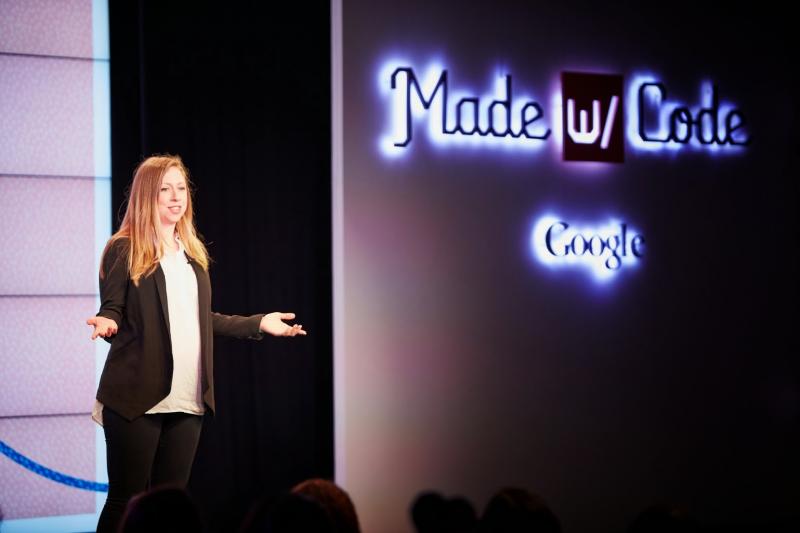 I could not have been more delighted to be a part of this week’s kickoff for Google’s Made With Code, a timely, multi-million dollar initiative to bring more girls into coding and engineering and creating and solving problems via technology.

Because as Chelsea Clinton so astutely put it at the event, “right now, women’s voices are not being heard at sufficient levels” – something we’ve been saying for a while now.

In fact, according to the National Science Board, women make up only 26% of computer science and math professionals in the US right now. And the number of female CS grads has dropped drastically since the 1980’s – which kind of shocked me.

The gist of the brand new Made With Code website is to demonstrate that so many things we love are made with code, from Pixar Animation to 3D printed jewelry. It’s meant to inspire girls–and it will–by showing other women who are pursuing dream jobs thanks to code, whether it’s saving lives across Africa through a UNICEF mobile reporting program, or creating an off-Broadway show that blends a love of dance with a love of technology.

As for the event itself, as a proud mom to a daughter who was just accepted into her school’s robotics club (sniff) I was so emotional seeing all the young women there, primed to take over the world some day. There was so much joy, diversity, and enthusiasm from NYC-area girls including The Girl Scouts, Girls Who Code, Black Girls Code, the Lower East Side Girls’ Club, and high schools around the city.

It  didn’t hurt that Mindy Kaling emceed, and Chelsea Clinton kicked things off, with inspiring speeches from Pixar’s Brave DP Danielle Feinberg, UNICEF’s Erica Kochi, and iLuminations creator Miral Kotb along the way. Plus I liked seeing our friends from littleBits there, and if you haven’t checked out their circuit kits for kids, they make fantastic gifts for tweens or teens.

By the way, I love Mindy Kaling’s idea to invent an app called “What’s His Deal?” So you can just point your phone at a guy and figure out, you know…what his deal is.

If you have daughters (or even sons for that matter), be sure to check out the website. Whether or not they’ve showed an interest in coding or programming or robotics, you may be surprised how thrilling it is for them to discover the projects your kid can start making with code on site, from designing 3-D bracelets to making a custom GIF using Blockly, even composing your own simple beat soundtrack.

Girls can also find inspiration from other young makers doing some pretty awesome things. Just like your child might some day.

Check out MadeWithCode.com which just launched this week, and thanks to Google for including Cool Mom Tech in your amazing event. We feel more committed than ever to find great ways to encourage girls to participate in STEM projects and careers.   Also visit the Made with Code social media communities and follow breaking news at #madewithcode.

Here’s the awesome I Love It performance from Icona Pop. FYI It’s not the clean for radio version; it would be pretty hard to get a few hundred girls singing along in the audience to bleep themselves. Joining them on stage you can catch some of the girls in attendance, along with Google[x] VP Megan Smith, Miral Kotb and Danielle Feinberg. The energy was amazing.