The Monument Valley app is a stunner. And a stumper. 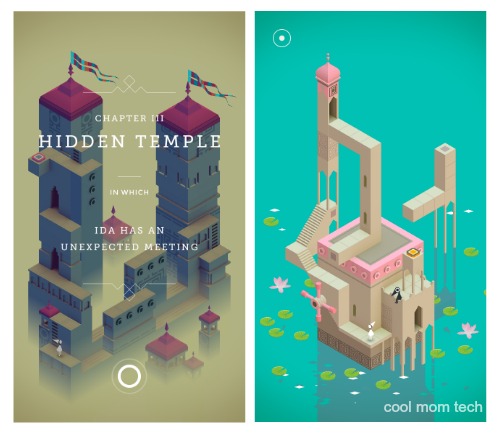 The new Monument Valley app may be the  most gorgeous, mindblowingly cool app I’ve seen in a while. And that’s saying something. It’s a puzzle game that’s like Figaro Pho meets MC Escher. Your job is to get the silent little princess Ida around, by rotating or manipulating pieces of a grid that suddenly create new perspectives. So what looks like a staircase with no way up, suddenly becomes a perfectly flat path to walk across.

It’s all optical illusions and impossible constructions that turn possible. You know, like Escher.

The puzzles get increasingly challenging in the best possible way. By Chapter III you’re moving castle walls that previous seemed immobile, which when I first got stuck, and had to start over and try a new path. Complete a level, and you get the most subtle little reward, like a rotating geometric figure in space shooting stars. (Just go with it.)

I can’t rave enough about the stunning graphics and the subtlety of the whole production; and even the music is cool, in that Myst sort of way, though it’s easy enough to mute.

This is a terrific little puzzle app for adults, and for tweens and older kids who are awesome with spacial relations and puzzles, though they might need a little help figuring out what to tap next – it’s not totally intuitive. But then, that’s what makes it challenging and fun. Among many other things. Let’s just say the second I hit publish on this review, I’m going back to playing.

Download the Monument Valley app for $3.99 at iTunes for iOS  or grab Monument Valley for Android at Google Play I’m glad I did. There are ten levels and we’re hoping more to come.