Got an old iOS device lying around? The Presence app turns it into a home security system, free. 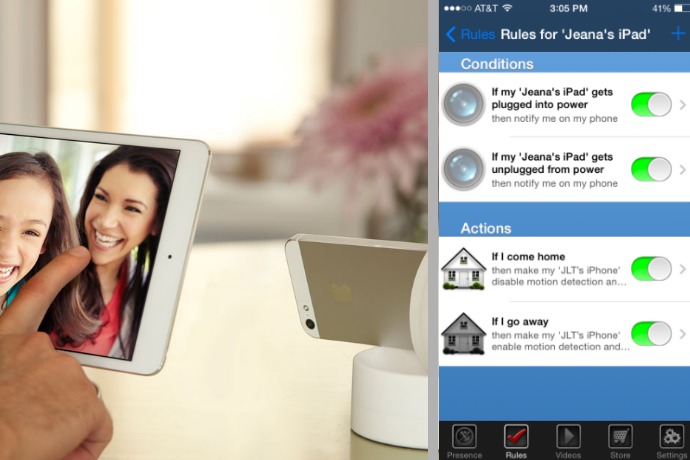 We have covered many ways to recycle your tech devices in the past, but if you want to create an amazing new use from an older device, like turning it into a baby monitor, home security system or having a way to see what exactly those kids are doing in the basement while you’re upstairs, you’re going to want to know more about the Presence app.

I have a couple of old iPhones lying around the house and while they’re too old at this point to sell back for any decent sum, it’s nice to know that now they actually have a use beyond sitting in a desk drawer (or acting as a prop when my toddler “makes calls.”) All you have to do is upload the free app onto two devices, so that one acts as the camera while the other is the monitor with two-way video between them. Audio too, for walkie-talkie style conversations.

You can even set up rules, like when and where to detect movement, and how you want to be alerted. I can find out if my kids are plugging in an iPad when they’re not supposed to, whether a garage door is opening when it’s not supposed to be, and I can even find out if the “monitor” device somehow gets unplugged.

How clever that it’s made to work with old devices and not just new ones. Because you know, we’re using the new ones! We have Minecraft to play around here.

While other Wi-Fi monitors like the D-Link Baby Camera and the Angelcare AC1200 offer features that you’d want for a nursery, like temperature readings, lullabies and night-vision, they don’t offer the motion detection alerts that you get from this app. Plus, it’s free! And if it’s something you’re using for general home use — for example, to see when your kids get home from school–the motion feature will just let you know when its detected movement and even send you a video clip of it via email.  Whoa.

As a bonus they’ve even just added live video tweeting, should you want to send out info to all your fans and followers–maybe for an anniversary party or some other event; not your kids in the playroom of course.

So where’s the catch? Of course there are optional in-app purchases to get you pro video subscriptions ($1.99 for a 7-day pass to try it out, $44.99 a year) which give you 2GB or storage, and extra-long recording time. They may also require some (pricy) additional cables and accessories. I think for many parents, the free version of Presence is just fine.

Either way, pretty nice that you don’t have to keep the monitoring screen on your phone constantly to have another pair of eyes on the house.

Presence works on iPhone 3GS, iPad 2, iPod Touch 4 and newer, and is available as a free app in iTunes with optional upgrades to Pro Video Subscriptions. They also have a store to sell stands, mounts and accessories, but we can recommend similar options for a lot less.