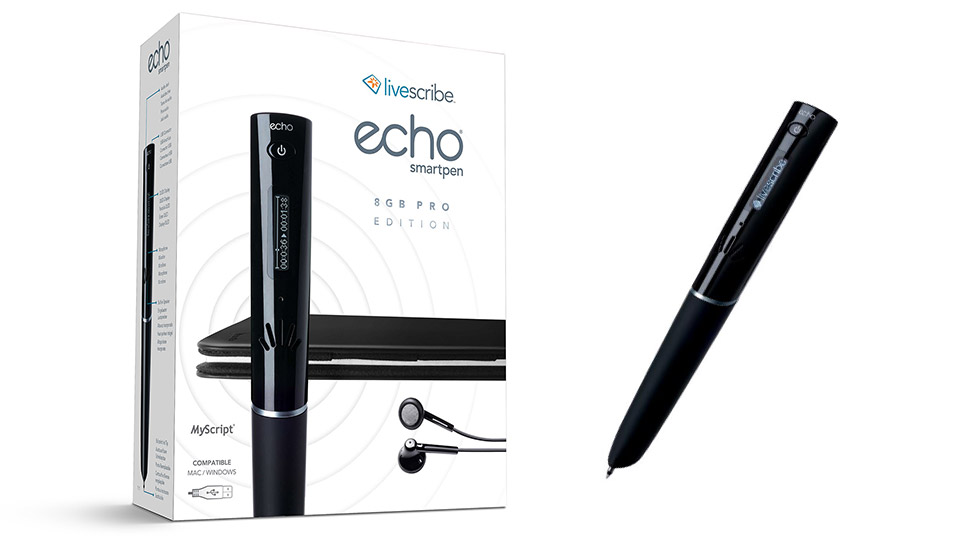 Last year I told you about the greatest pen that has ever penned: also known as the Livescribe 3 smartpen. Well, this year, kicking off back-to-school season with class, comes the new Echo Smartpen 8GB Pro Edition.

Very similar to Livescribe 3, the Echo Smartpen digitizes handwritten notes and, using the built-in mic, also records audio that’s synced up to your notes. That means it’s easy to look at some note you scribbled so fast you just can’t read it (been there), then go back and actually hear what was said in the lecture or group work session at the time. The pen can also transfer those notes and audio right to your computer via USB, so no need to type in stuff a second time that you’ve already jotted down.

You just have to be sure you’re using the special notebook, which has a dot paper that contains the “controls” (record, pause, and so on) for the smartpen.

One key difference from what I can tell between the new Echo Pro and some of Livescribe’s other smartpens is its 8GB of built-in storage. That’s enough memory to bank up to 800 hours of pencasts (there’s a new word for you, dictionary editors) or more than 100,000 pages of notes. That’s like a couple of college textbooks worth of notes.

Now those 8 gigs also means that you’re paying nearly $200 for this device, as opposed to the Echo Set 1 which runs just $134 right now. So be sure you’re not getting more pen than you need.

You do get more than the pen in this complete set though; there’s a download of Echo Desktop, a 3-D recording headset, replacing ink cartridges and pen caps, the micro-USB cable for syncing, and a 100-page notebook. As a bonus, there’s you also get MyScript for Livescribe software, which lets you convert your handwriting into digital text. If you need  extra Livescribe notebook packs (above), we found them on our affiliate Amazon for great prices

Yes, it’s expensive, but if we were back in college again, this would definitely top our own wishlists over a crockpot.

The Echo Smartpen 8GB Pro Edition package is compatible with Mac and Windows, available on Livescribe for $199.95. You can can also find supplies like extra Livescribe notebook packs on our affiliate Amazon for great prices — but note the pen itself is most affordable on the Livescribe site.