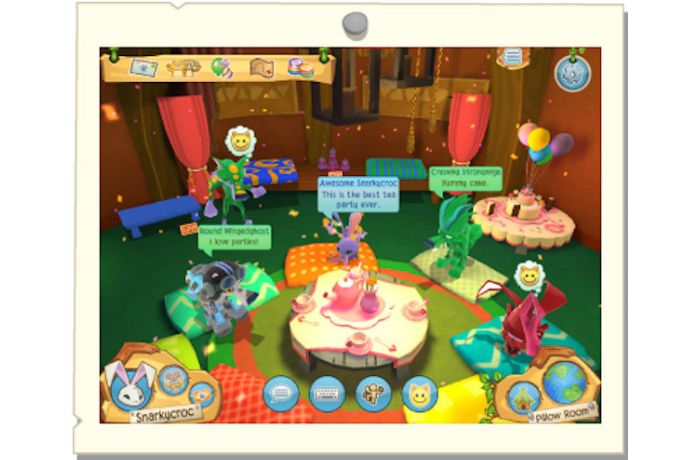 Warning: It’s a jungle out there. No, really. There’s a crazy, colorful jungle filled with wild animals and plants for kids to explore, and it’s right there on your smart device. Since we always love the kinds of educational apps that kids can’t put down, we’re really happy to share Animal Jam – Play Wild! It’s a free iOS app that’s based on Animal Jam, the web-based playground and community for kids who are, uh, wild about animals, and it was created in collaboration with National Geographic Kids magazine.

With both the online and mobile versions, kids about 10 and up can create their own animal characters and dens, adopt other wild animals as pets, chat with friends, and team up with other kids in this virtual world for adventures. Plus, they can learn a ton of fun facts and intel about the animals and their natural habitats.

I like the vibrant, 3D graphics on this app, and I can totally see tweens getting into the creativity and build-it aspects of Play Wild. It’s kind of like Wild Kratts meets a super junior version of “The Sims” video game world with some safe social networking built in. A good idea considering most — if not all? — of the other big social media outlets are not always the best places for tweens and early teens.

As for the safety aspect, I like that in the Play Wild app, there’s an option to disable the in-app purchasing feature, which can definitely cut back on parents’ safety and privacy concerns. However, you should know that some reviewers of the web-based Animal Jam have pointed to lapses in the filters, bad language and some sexual content that has shown up quite a bit. It’s too early to tell if this is an issue on the weeks-old app but so far so good.

(Our guess is that the kinds of idiots who are likely to troll kids’ sites are less likely to take the time to download a mobile app to do the same.)

Overall, I’d say Play Wild app is an easy, enjoyable way for young animal lovers, and maybe even future zoologists, to learn about the natural world around them in a safe, fun space.