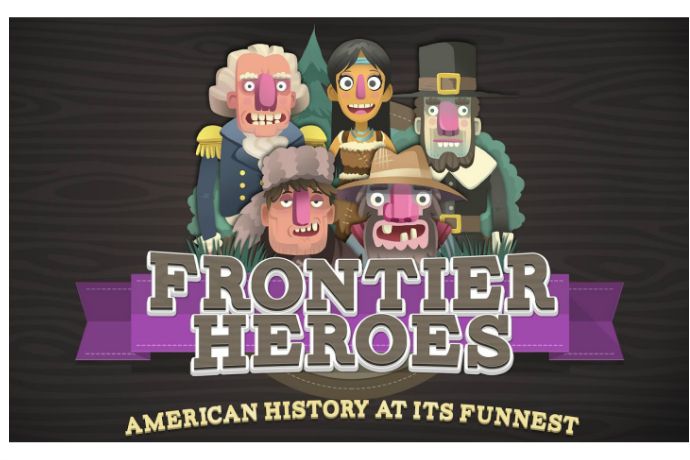 When it comes to teaching my kids history, I’ll use anything I can get my hands on, from Crash Course and Brain Pop videos, to cool apps like History Here that help us learn the history of places we visit. And now I’ve found a lighthearted yet smart app called Frontier Heroes, created by the History channel’s new Planet H digital division, that sneaks some learning into some challenging game play I think your kids will love.

Related: WonderBox: A game-changer in educational apps for kids

The free Frontier Heroes app for iOS and Google Play is a multi-stage game that takes players through different eras in American history. Using bright, cartoony graphics, and era-appropriate background music, players must work their way through several challenges in each era, beginning with Early America when native people lived on this land (which wasn’t known as “America” to them at all), and ending with Land of the Free — a patriotic section that I may never reach because it’s locked until I successfully complete the earlier eras.

While Frontier Heroes is rated for ages 4+, the app is really geared toward kids over the age of 9 due to the challenges themselves which are pretty tricky, even for older kids. Like helping Paul Revere on his ride by jumping obstacles and ringing bells in the American Revolution section.

Though tricky, what makes this app so fun is the wide variety of games which doesn’t ask kids to do the same type of challenge over and over. Also, the bright graphics are really crisp and clear, especially on a larger tablet . Plus, as an app made by The History Channel, I was glad to see that facts are sprinkled throughout this app so that kids can learn while they play.

Also impressive is that Frontier Heroes is totally free, for all 20+ games. There also are no in-app purchases or banner ads popping up on the screen.

Now there is one huge caveat here, in that this is a very sanitized, somewhat stereotypical and definitely cartoony version of early America. In other words, it’s important to talk to your kids about what they are seeing.

I find that Native people are respectfully depicted, except for the fact that the various diverse tribes are condensed into one homogenized composite (which admittedly is a pretty big exception), and their loss of homeland is skipped over entirely, something I find a little surprising. I also might be a bit offended if my ancestors were California Gold Rush pioneers since I’m sure they weren’t all wide-eyed, toothless caricatures. And, as far as I’ve been able to see so far, the Civil War and slavery are not touched upon at all here, though I find that understandable given the lighthearted gameplay of this app.

But then, that’s how teachable moments arise for parents. And perhaps Frontier Heroes will pique a child’s curiosity to learn more about this period of history, or even tie in with a social studies units kids are learning in school.

Or maybe they’ll just appreciate that the lives we have now come thanks to all those people who paved the hard and bumpy road before us.