A must see: Dr. King’s legacy, in his own writing 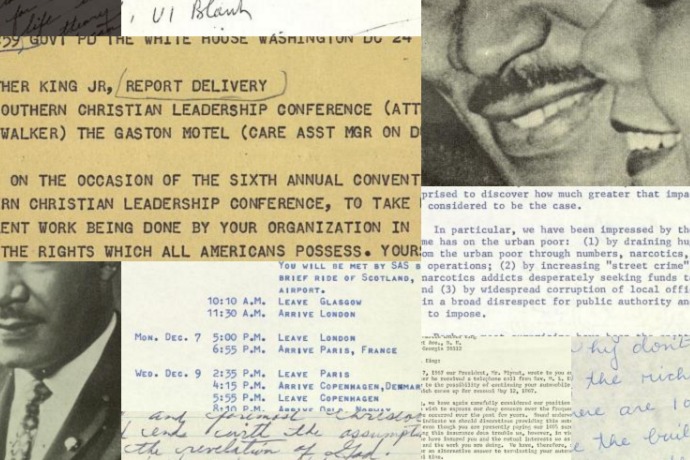 One thing that’s become abundantly clear to me after a year of following Black Lives Matter tweets and listening more closely to what people of color have to say about their own heroes and history without media spin, is that a lot of us have only grasped a very very small portion of Dr. Martin Luther King’s vision and values. It’s easy to cherry-pick quotes of his that make easily likeable Facebook and Instagram photos (all shared with the best of intentions), or to honor his legacy with thoughts about peace. I’ve done it myself. But I’m coming to realize more and more, that it’s really a simplification.

There is so, so much more to Dr. King’s journey, his beliefs, his accomplishments and the means it took to get there. There’s so much complexity in his views of injustice and racial subjugation. I feel I only know the smallest fraction of it.

So whether you consider yourself a scholar of Dr. King’s life’s work, or you want to learn more about the bigger picture, I think it’s brought to life beautifully via The King Center online.

If you haven’t been to the site — or if you haven’t sat down with your children to go through it together — The 30th anniversary of MLK Day is a perfect opportunity to do so. I think kids will find it fascinating.

It’s like a virtual walk through Atlanta’s King Center, with a growing collection of digitized memorabilia, clippings, sermons, photos, and notecards from the more than one million documents preserved there.

It’s a testament to technology — and to the historians committed to the project — that now these original sources are now available to the whole world online, anytime, wherever we are.

Give yourself some time to browse; it’s so easy to go down the rabbit hole of fascinating documents archived there: A telegram of congratulations to Thurgood Marshall on his appointment (above). The original 13-page typewritten 1968 Chicago Non-Violent Action Proposal. A foreward by Dr. King in an extensive brochure about school integration. A draft of his speech accepting the NYC Medallion in 1964. A fascinating brainstorm on Waldorf-Astoria Stationery of 12 ways to keep national attention focused on Selma.

Sometimes the most interesting finds are the smaller ones; I can’t stop admiring the beautiful logo of the Catholic Interracial Council, spotted on the cover of their 1965 Peace and Freedom Awards ceremony program that honored Dr. King. Flip the pages, and you’ll see merit awards given to the Chairman of Deere and Co, the United Auto Workers’ Assistant Director of Education, and a Harlem Social Worker named Carole Gross.

That lead me to just what each of them were being honored for, unearthing some beautiful examples of of the smaller, positive ripples Dr. King’s message sent out into the world.

There’s also some truly horrifying hate mail that’s been preserved in the archives, and it’s painful and difficult to read. But perhaps what’s most disturbing to me about it is how so much of it reads (grammar and all) like many of the hateful op-ed pieces and social media posts I’m still seeing today, nearly 50 years later.

This is perhaps the most essential reason for me not to just pay lip service to Dr. King’s accomplishments today, but to really carve out some time to sit with my family, and talk about what else we can do to keep social progress and human decency going.