Just look what kids can make with the 3Doodler Start 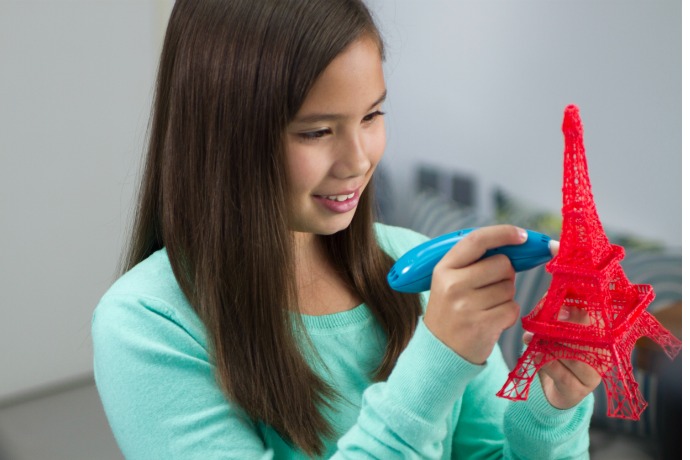 We went crazy for the incredibly cool 3Doodler 3D-printing pen when we first saw it back in 2013, but it wasn’t really a toy that our younger kids could safely use on their own. Until now. With the upcoming launch of 3Doodler Start, our kids can now get in on the action with a kid-friendly 3D pen that will have them making truly incredible plastic creations.

In many ways, the 3Doodler Start works just like the original, and version 2.0, 3Doodler pens. Just insert a colorful plastic strand into the back of the pen, and it will come out the tip as a pliable material that will quickly dry into whatever shape you make it. If you’ve ever used a glue gun, it’s not too different from that, except that you’ll never see a glue gun do what this pen can do.

I mean, seriously: Look at what it can do.

Kids will go bananas learning how to make figurines to play with or maybe an Eiffel Tower for their dollhouse people to visit. Whip up a pair of glasses or play food for their stuffed animals or make some colorful bracelets for a friend. It takes a bit of practice and patience to get good at it, but after a short learning curve, the creations can get pretty incredible.

To make the 3Doodler Start safe for kids, the company tinkered with the Eco-Plastic that goes into the pen so that this non-toxic and BPA-free plastic doesn’t need to be heated up as hot to be used. That means eager fingers won’t get burned by the colorful ribbons coming out of the pen’s tip. It also means that the plastic from the original 3Doodler pens are not interchangeable with the 3Doodler Start, something to keep in mind if you are looking to purchase refills.

The pen itself was also redesigned  to be more kid-friendly with no parts that get hot to the touch. And since my kids have a habit of tripping over cords, I love that the 3Doodler Start is rechargeable, so that they can use it wirelessly.

And while I usually hate finding tons of little plastic toys around the house, the Eco-Plastic in the 3Doodler Start is made in Great Britain from food-safe materials that can be composted with your food scraps when finished. How great is that?

The only downside? You’ll need to wait until the end of May for this new toy to ship. But, to soften the blow, you can get some pretty sweet early-bird pricing deals for the next few days so that you can get the Essential Pack (shown above) for under $40. Though, you may want to grab additional plastic refills while you’re at it too. Something tells me you’ll need them.

Early bird pricing for the 3Doodler Start ends on March 9, 2016, with the product shipping by May 31, 2016. The 3Doodler Start is recommended for kids ages 8+, though younger kids could also use it with parental supervision.