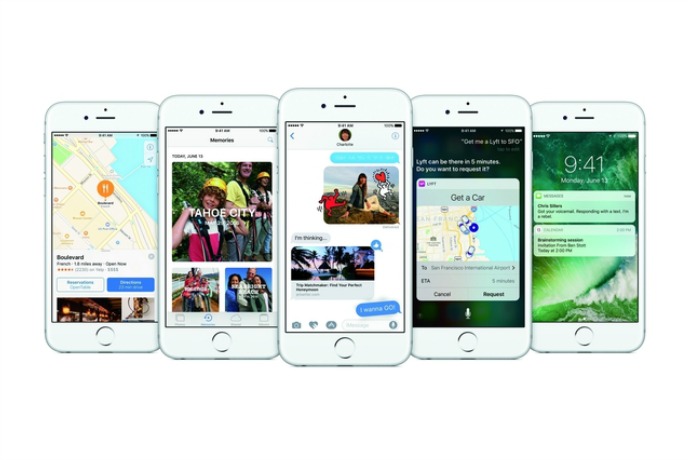 Even though I downloaded iOS 10 last week, like many of you, it’s taking me awhile to get used to all the changes and new iOS 10 features. Oof, there are a ton. And while I have to admit that I’m liking most of them, there’s definitely a learning curve, even for someone who considers herself to be pretty tech savvy.

So to help get you started, here are 10 of our favorite iOS 10 features that you should know definitely about, some of which I love, some of which I’m still adjusting to, plus some tips to help you make the most of them.

1. Press the home button to unlock

That’s right, friends. There’s no more swipe to unlock. You now have to press the home button to unlock your phone (or get to the passcode screen). I’ve yet to actually remember this, even after almost a full four days with iOS 10, but I actually like the concept.

If it doesn’t register with my brain soon, I’ll probably do what lots of folks are doing and disabling the press home to unlock feature.

2. Delete those default apps, at last

Finally, FINALLY, iOS 10 allows you to delete the default apps you never use, which is great for so many of us who have a different weather app, use Kindle instead of iBooks, Spotify instead of Apple Music. You get the idea.

So, you can now potentially say to good-bye to everything from Weather to Stocks, even Apple Maps, News, iBooks, Apple Music, and yes, Mail.

If you’re not sure how to delete an app, just hold your finger down on it, then when it starts shaking, click the “x” and poof, it will disappear.

3. Use the fun expressive iMessage features

I can’t deny that I’ve been having way too much fun with the new expressive messaging features on iOS 10, though I’m not quite sure they’re necessary. Like, do I really need to be able to draw over my face during a video? Probably not, but that doesn’t mean it’s not fun to try. A few hundred times.

Thanks to iOS 10, you’ve got everything from new emojis to Hamilton gifs (!!), along with handwritten greetings, talk bubbles, a heart beat, even a kiss. They’re all pretty easy to figure out thanks to handy directions right within iMessage, though getting used to having all the options might take you a little bit of time.

Related: 8 smart ways to make your iPhone less distracting without turning it off

I’m a huge fan of the iPhone Control Center, even more so now with the new iOS 10 update. It’s actually 2 screens now, the first (found when you swipe up) with new prompts for Night Shift, as well as familiar prompts like airplane mode, WIFI, and Do No Disturb, just to name a few.

In order to control your music, you’ll need to swipe left from that main Control Center screen. Now, along with controls for your music, you get an image and longer description of what’s playing.

If you didn’t decide to delete the Mail app (see #9), you’ll notice a few awesome new features that really improve Mail, like filter by Unread, or my favorite, the one-click Unsubscribe, which makes it so easy to get off mailing lists you really don’t want to be on. (Not counting ours, of course!)

You’ll see it right at the top of your subscription email message if it applies. Simply click, and boom, you’re off the list.

While that’s my favorite, there are actually a lot of cool new iOS 10 features that improve the Mail app, like a smart new look for threaded messages.

6. Do more from your lock screen – like use the totally updated new texting features

Once you’re in your phone, if you swipe right, you’ll hit your Favorites widget, which allows you to customize your lock screen. I actually really love this feature, as you can add (or delete) pretty much whatever you want to make your iPhone work to your advantage. You can add features like “What’s Next,” which shows upcoming events on your calendar, the weather, news, reminders, even stuff like travel times from your maps app.

To edit, just swipe right from your home screen, then scroll down and hit “edit.” From there, you can add or delete from a slew of different options.

But the feature most people are talking about with the iOS 10 update, is easier access to texts. You could always see incoming messages right from your lock screen, but now you can do so much more with them including use the new texting features like stickers (now available in their own app store), responses (nice to send a “haha” response that attaches to the text you received instead of sending a whole new text), and sketches which previously, only Apple Watch users could play with.

With iOS 10 you’ll find that Hey Siri can do a whole lot more than she did before. With certain apps now integrated, you can do everything from ask her to get you an Uber, to send a message to someone on LinkedIn.

You’ll want to make sure your apps are all updated, then go into Settings > Siri and make sure “Hey Siri” is enabled. Then scroll down to App Support and enable the apps that you’d like her to be able to use.

Now, I’m admittedly a Google Maps and Spotify user, so these two updates aren’t necessarily those I’d be too interested in personally. But I know with the popularity of Apple Music in particular, the changes should be a big hit (ha) and I have to say that the updates to both look pretty sweet.

On a quick scan, the new iOS 10 updates make the much maligned Apple Maps muuuuuch better. Not only can you choose your mode of transportation (like walking, transit, even ride to help you hail an Uber or Lyft), you can more easily search for restaurants, coffee shops, and gas stations, just to name a few. And the transit info for metro areas is far improved with more detail and clarity.

While navigating, it’s got large, clear type (something Waze could use for those of us of ahem, a certain age)  — although Liz took Apple Maps for a test run in NYC and the directions were less than stellar.  (Like no, sorry, we’re not making a U-Turn in the middle of Park Avenue when we could just make the next right turn instead.) But evidently the more people use it, the more accurate it will get so here’s hoping.

As for Apple Music, it has a completely different look, with bold headings that make it so much easier to find everything. The controls are larger and easier to see — including the scrubber which shows you where you are in a song — and they’ve amped up the For You section so that it not only helps you discover new music through curated playlists, but it auto-generates playlists from the songs you listen to most. It also allows you to integrate the artist connection feature right within For You which is smart and way easier.

But best of all perhaps, they’ve added lyrics which is something I know a lot of our kids will love. (And a lot of parents who want to be sure that song really is okay for the nine-year-old.)

9. Easily find and sort by Memories in Photos

Like so many of you, I’ve got tons of photos on my iPhone and little time to do anything with them other than hope they’re backed up on the Cloud (Note to self: Go check that right now). With Memories, Apple is creates movies for you, complete with music, using photos that are grouped together by event or location, along with a few categories from their own algorithm, like “Best of” or “Together” (which does have photos of me and my kids all together, actually).

Some of the groupings are awesome, like my 40th birthday trip to San Diego, where I took a ton of photos. Seeing them all together, with music, is great. Others, like the 400 selfies my kids took at my house — not so much.

However, the groups you do like, you can officially add to Memories, which then gives you the ability to edit them if you wish (you simply just delete which photos you don’t want in the set, or choose which ones you’d like to add in that they might have missed). Then you can save or share easily.

This is pretty much what Apple does best — bringing the human, emotional side to technology — and it’s really evident in this smart new feature.

Related: Unexpected ways to use your smartphone camera to make your life easier

10. Get better sleep through Bedtime

If you use your iPhone alarm as much as I do, then you’ll appreciate the new Bedtime feature, which when enabled can help ensure you’re getting enough sleep.

To set it up, head to your clock app > click bedtime, at the bottom middle. You’ll be asked a series of questions related to the time you want to wake up, how much sleep you want to get, and how long before bedtime you’d like a reminder to get to sleep, so you can get the number of hours you’re aiming for.  Once Bedtime is enabled, you’ll get that reminder, as well as sleep tracking to see how well you’re sticking to the routine.

As someone who tends to stay up way too late just to enjoy the quiet after my kids go to bed — often to the detriment of my own sleep needs —  I’m really looking forward to putting this iOS 10 feature to work.

For more information on all the new iOS 10 features (whew, there are lots), head over to Apple’s website.