Write a letter to Santa, watch it print and end up right in his hands. Magic? No, Pixma. 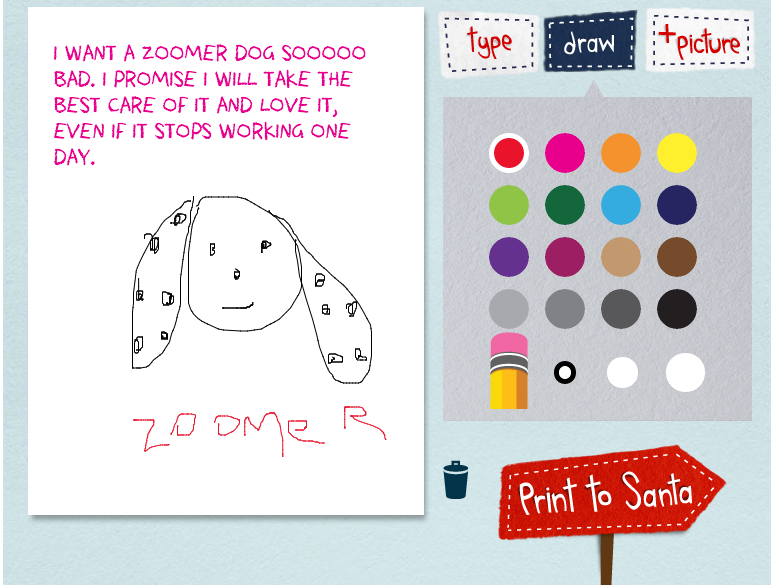 If your kid loves the magic of Santa apps, and how cool it is when Santa seems to interact with them, then we’ve got another one for you: the quirky but very charming Letters to Santa app from the Canon USA Pixma printer.

If your kid has yet to write to Santa yet–or has a few last minute additions to the list–this simple Facebook app lets your kids type, draw or even upload a photo (with your help of course) of their Christmas wish. Then behold! After the video loads, they can see that very note printing out of a Pixma printer at the North Pole, where it’s then intercepted by some highly caffeinated elves who scurry about to make your child’s wish come true.

The entire video is well done, if a bit over-the-top and possibly a little hard for young kids to follow–until the end, when a rogue creature who looks like the Snuggle Fabric Softener Bear and Fozzie Bear’s love child ends up putting that very letter right in Santa’s hands.

And that’s where your kids’ eyes bug open wide, and you will never be able to weasel out of “Santa” getting your kid that doll or bike or XBox One–or in my daughter’s case, Zoomer the robot dog who is currently a mere $399 from your friendly neighborhood eBay toy scalper.

The real point is to convey the benefit that using the Cloud, Pixma printers can print from anywhere–directly from your mobile phone using the iOS or Android app, from your social networks, from storage sites like Dropbox and Evernote,  or from online photo albums like Flickr or Picassa–right to anywhere there’s a Pixma printer. Even the North Pole. And of course the hope is that should you send your own wish to Santa, it would have something to do with that nice new Cloud-enabled printer.

Try the  Letters to Santa app on the Canon USA Facebook page then share the video by email with friends.