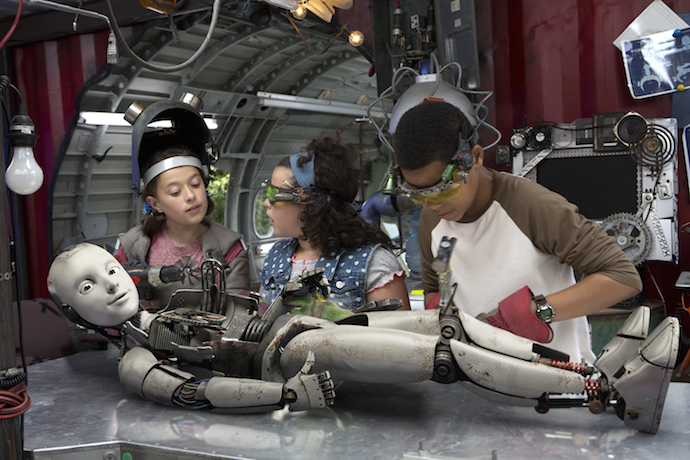 The stats are sobering: Women only account for 26 percent of the STEM jobs in the U.S. So there’s been a recent, nationwide nudge to get our girls and young women interested and engaged in science, technology, engineering and math, as we’ve reported through projects like Google’s Made With Code  and even the new LEGO female scientist minifigs.

Now Amazon Studios is throwing its hefty weight behind this push towards STEM with its first ever action-adventure series for 6 to 9-year-olds called, Annedroids which will give you Amazon Prime parents another reason to make good use of that annual fee. The science-based Amazon Original Series is aimed at both boys and girls, and I have to say, it’s a total hoot. I really enjoyed this one and — good news — so did my 5-year-old son.

The show follows an 11-year-old girl-genius and scientist named Anne. She lives in a trailer with her dad on this massive McGyver’d junkyard with a 10-foot fence, a secret passageway and high-tech security all around, where she builds androids, runs cool experiments and studies this fascinating world.

Anne “inherits” two new assistants, neighborhood kids Nick and Shania, who quickly become her buddies. She teaches them about science and tech, like the difference between an android and a robot: Androids act and sometimes look like people, robots don’t.  (Uh, did you know that? I didn’t. The babies are droppin’ knowledge, folks!)

On the other hand, Nick and Shania teach Anne about being a regular, goofy kid. Together the trio get into pre-teen hijinks while exploring, investigating and learning about the world and each other in 30-minute episodes.

Although the core message behind the show is admirable, it’s the three actors (Addison Holley as Anne, Adrianna Di Liello as Shania and Jadiel Dowlin as Nick) that really pull me in here. These kids are completely charming, sweet and self-assured. Also? Points scored for being a Canadian production — it’s filmed in Toronto. I like to root-root-root for my own home team.

The Verdict: Overall, I think Annedroids is a clean family show that’s enlightening and endearing. Looking forward to more episodes and — I hope — more seasons to come.

The first seven episodes of Annedroids are available for streaming now, exclusively and free on  AmazonPrime Instant Video.  A big thanks to Amazon and Sinking Ship Entertainment for including Cool Mom Tech on the press junket to screen the series.

Also, check out our recommendations for the other Amazon Original Series for Kids.