Fun geeky stocking stuffers all under $10. 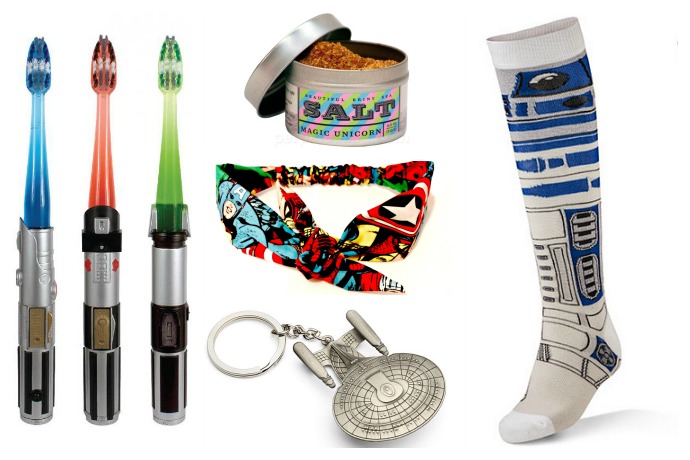 While we love finding cool gifts for kids under $15 that don’t seem like stocking stuffers, there’s something to be said for finding actual awesome stocking stuffers that won’t break the bank either. It’s not easy though when you’ve got an adult to shop for, or your kid is starting to outgrow mere candy canes and stickers. Here are a bunch of ideas from some of our favorite shops.

I love so many things at Kikkerland which is like ground zero for cool, affordable, geeky stocking stuffers. From a mini stylus (just $6 for 2) to fun little flashlights or these fun earbuds with a robot key, you can pretty much fill a whole stocking just from this shop.

We always love including Etsy shop Earmark in our holiday gift guides, for making such fun engraved pop culture pencils. The references to Game of Thrones and Anchorman proooobably aren’t for kids. Or maybe they are. I don’t judge.

Mario fans might recognize these fun gloves at H+M and for just $5.95, I’d get two pairs at once. On the outside chance that you have children who rarely make it through to the end of winter with the same number of gloves they started with.

Color your own cards are so great to have around, especially after the holidays so kids can write their own thank you notes. (Ideally.) This space-themed set at Stubby Pencil Studio is just $6.99 and while they’re made for young kids, even my second grader loves them.

Urban Outfitters has tons of fun goodies on sale. The Mokiyobi Threads space explorer patch can make an old jacket new again, or transform a plain backpack into an enviable one.

And if you have a photography fan with a sense of humor, I am laughing so hard at this Polaroid Toilet Paper. Yes, it’s probably the only time I would recommend toilet paper as a holiday gift.

Because girls like super heroes too–and not just Wonder Woman and Black Widow–one in your life might be smitten with this fun Avengers fabric headband from 2trUe on Etsy.

Practical stocking stuffers can still be fun, like Belkin’s Home charger which is around $9 at Target. It’s the fastest way to get that smartphone battery charged back up again so your home videos don’t die right in the middle of the big gift-unwrapping fest.

Every year my family would trade tins of coal, just for fun. I think it’s even cooler though if I start giving them tins of Magic Unicorn Salt. It’s not a punishment for being naughty–but it just might get my kids to try new foods and I think that’s even better.

We couldn’t have a roundup of geeky stocking stuffers without including something Star Wars. And while there are tons of nifty Empire-related goodies out there, this year I’m kind of wanting a pair of these Star Wars knee-highs from Think Geek.

Also fun, the new Goodnight Darth Vader book which really is stocking sized–or maybe it will peek out the top.  It’s the sequel to the super popular Darth Vader and Son, and I think any parent would get a kick out of it.

And if these Star Wars Light Saber tooth brushes don’t make your kids want to brush those candy canes out of their teeth, we don’t know what will.

If your science fiction fandom leans more toward the Trek than the Wars, this Star Trek TNG Enterprise keychain is pretty great looking. Can’t necessarily take you where no man has gone before, but then, I guess it depends just what kinds of keys are on it.

My kids are totally obsessed with optical illusions, so I love these mini decks of 50 Optical Illusion Cards which can keep them busy in restaurants, long car trips, or quiet playtime moments after I yell ENOUGH WITH THE VIDEO GAMES, YOU GUYS. I mean, gently pry the tablets out of their hands.

I always loved science museums growing up, but the best part might have been looking for Freeze Dried Astronaut Ice Cream in the gift shop. Fortunately, Think Geek has them in stock. And yes, they do fit in stockings. I’ve tried quite a few years.

There is no way I could put together some of my favorite geeky stocking stuffers without including a Mockingjay pin. Katniss 4Ever.