Aether Cone: Like your own psychic wireless speaker and music player 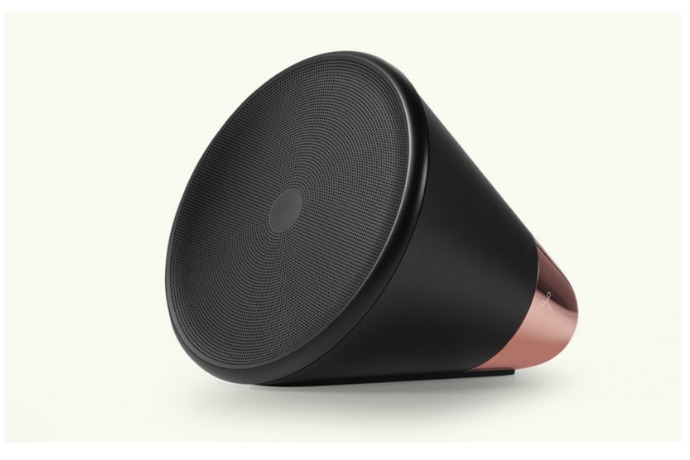 I have seen a lot of really cool wireless speakers, but the first thing to catch my eye on the Aether Cone was the shape. It felt like a throwback to the old-timey gramophone, and the copper and black color combo totally amplified the cool factor. (Ha, get it?) But the Aether Cone isn’t your typical wireless speaker — it’s a music player designed to stream from online service Rdio or your personal iTunes library via Apple AirPlay.

Basically, Cone is a “thinking” music player. It learns what kinds of music you like so it can predict what you’ll want to hear and when. The more you use Cone, the better it gets at figuring out your music moods. Crazy, right?

I like the player’s simple, streamlined design. There’s a sleek on/off switch at the back, and two raised copper buttons on top that control volume. The round face acts as a dial–an easy spin to the left replays the song, or turn it to the right to skip to the next song. A bigger turn of the dial signals to the device that you want to change the whole genre. This is where the innovative “thinking” part of the Aether Cone comes into play.

What’s extra cool: there’s a soft touch button at the center of the speaker that responds to voice commands. I told it to play Sia and it did.

Just know that the Cone is not Bluetooth-enabled; it connects to Rdio and Apple AirPlay via your WiFi, as well as the companion app, available for both iOS and Android.

Despite all this amazing potential, I will say there are a few kinks that need to be ironed out in order to make Cone a true game-changer. Set-up out the box is not as smooth or intuitive as I would expect, though in my experience, tech support is prompt and helpful. Once I did get the Aether Cone working, I discovered that if you want to see what’s playing at that moment, you have to use the companion app. (Or Shazam. Ha.) But the app has quite a few of its own issues at this early stage, making my experience with it only meh.

Also know that to get an ad-free Rdio experience — and to take full advantage of all of Cone’s features, like those voice commands I love — you’ll have to pony up for a monthly subscription plan with Rdio Unlimited. This might be a turn-off for those who already have paid plans going with Spotify or Pandora, for example.

Overall, the Aether Cone is a terrific concept with gorgeous design and solid sound. If you’re already a Rdio subscriber, or you’re looking for a reason to switch, this is a great option. But if you’re a devoted Spotify fan, I’d say wait until version 2.0 comes around and hopefully some of the other kinks will be ironed out by then too.

Aether Cone streaming music speaker is available on the Aether website for $399. It comes in black and copper or white and silver. The companion app is a free download available on iTunes and Google Play.