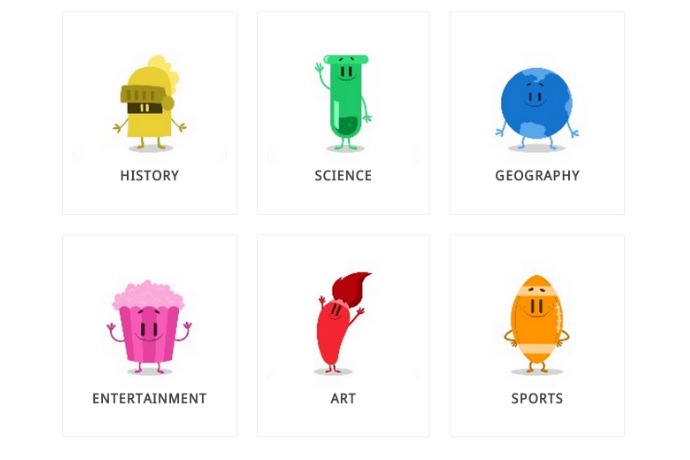 There’s a new obsession in my house: trivia apps. We’re battling for bragging rights over questions like, What was the real name of novelist George Orwell? Or, What color is young Anna’s nightgown in Frozen?Frankly, I think it’s perfectly fair for me to trick my kids into learning facts about history or math or the occasional animated movie, because you never know when Jeopardy will call. And we’ve found two really fun trivia apps that are keeping us interested for more than just a game or two, but they’re both very different in how they’re played.

Both of these apps connect to your social media (with your permission), so you can choose to play with friends or random opponents. Or, in our case, very competitive family members.

With Trivia Crack, you’re can start up to 3 new games each day. Spin the wheel to get a question from one of 6 broad categories. Answer three questions right, and you are given a “crown” question for a point. When you miss a question, it throws the game over to your opponent for their turn. The first player to get a crown question right in each category wins the game.

Trivia Crack is a slower-paced game than you might think. In fact, there could be as many as 47 multiple-choice questions in a game and it may be played over a few days, as players alternate turns.

Just know that the questions themselves are crowdsourced. This means you have the potential to get really niche questions, and it also means that sometimes the grammar is bad. Also, young kids might argue that it isn’t fair when their questions are harder than their opponents’ questions. But it hasn’t stopped us from enjoying it.

Also be aware that there are ads on the free version of the app, and tons of in-app purchases for Powerups (so keep those parental filters for purchases on!), but I’ve found it’s just as fun without them.
(free, on iOS or Android; $2.99, ad-free version for iOS)

There is no limit to how many QuizUp trivia app games you can play in a given day, which might be a pro or a con, depending on your level of addiction. There are hundreds of categories of questions that you can choose from, from very broad (the arts, history, sports) to very specific (brand logos, stage musicals, baking) and a search bar to help you find what you’re looking for.

However in this trivia app, you’re playing against either a select “friend” (as in your family members), or random people from the Internet in each match-up. I like playing with my kids, but I understand there’s a certain satisfaction in trouncing a twelve-year-old from the UK in Harry Potter knowledge.

There are seven multiple choice questions to a game –short and sweet– and you each get ten seconds to answer the same multiple-choice questions at the same time, something I think kids will like in terms of fairness.  You score more points the faster you answer. Know that this may get easier the more you play, because if you stick with a category you will surely see the same questions come up a few times.

Questions for QuizUp are all written and vetted by their own team, not crowd-sourced, so if you’re using it to teach kids about history, math, or geography you can feel pretty good that they’re actually learning something while they’re playing.

(free for iOS or Android)

If you’re geeked-out excited about trivia, log on to one of these fun trivia apps and challenge me to a game. Chances are, I’ll be there playing.