Sleep Number’s new Sleep IQ Kids Bed could help keep your child in bed. But is it worth it? 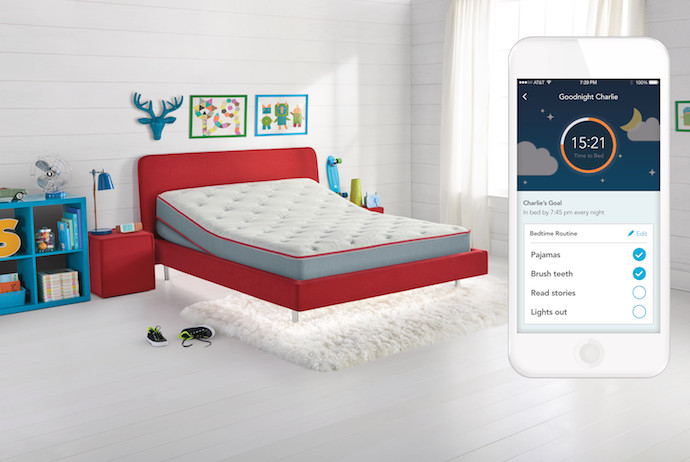 At the CES show this month, there was a lot of buzz in my social feeds around a new technology from Sleep Number Bed made just for kids called SleepIQ Kids that launches later in 2015. Looking more closely at the myriad tweets, it seems the company had enlisted the services of a lot of bloggers to promote it (the #ad #sponsored #client hashtags were a good tip-off). Which is fine, but I was interested in seeing objectively for myself whether the product held up to all the hype.

A half-hour press demo later, I can definitely see why the company is making this technology their big push for the year. It really is a fascinating concept: You buy a Sleep Number Bed then add the Sleep IQ technology which consists of sensors that track breathing, heart rate and movement. The data and subsequent sleep analysis is sent to a companion app or to your PC via WiFi with some extra features in the kids’ version of the app.

(Though a minor complaint, I wish it connected via Bluetooth. Wifi will give you broader range, all ye parents with mansions, but should it turn off for some reason, like an outage in your area, you lose your tracking during that period. I always liked how the Jawbone band saved my data in the band until I had a connection for syncing.)

Overall, the KidIQ system is a clever way for the company to take advantage of the ubiquitous sleep tracking trend and apply it to children. After all, we parents can’t always help our own too-late bedtimes, but we can sure do something about getting our kids to sleep earlier and establishing healthy routines.

The mattress itself offers adjustable firmness–as with all Sleep Number mattresses–that can adapt and grow with your kid. Plus kids can tilt the mattress up on an angle, should propping up a pillow be too old-fashioned for you.

My favorite part of the bed though is the automated light underneath that turns on as soon as a child gets out, then turns off when she returns, like a movement sensor-enabled night light. Also, there’s the ability to use the app to turn a night light or nightstand reading lamp on and off remotely. Which could put an end to I’M TELLING YOU ONE LAST TIME, LIGHTS OUT!   Though that’s nothing a Belkin WeMo couldn’t do for under $50.

In fact, I like that idea! I may just hook a WeMo up to my kids’ bedroom lamp today.

Now as a parent of a restless sleeper, I can absolutely see the benefits of the Sleep IQ Kids Bed for some families. For a toddler who’s sleep-training, or even a bedtime-averse older kid, the app gamifies nighttime routines, awarding stars for behaviors like being in bed on time each night. It could also be smart for children with asthma or other ailments that create sleep challenges that might concern their parents. Parents will get specific info about when your kid is awake, when she’s asleep, even an alert when she’s out of bed, all of which can help you make better decisions about aspects like room temperature and bedtime routines. And as a cute extra feature on the app,  you “search for monsters” and prove they’re all gone.

(If you see it on your iPhone, it must be true, right?) 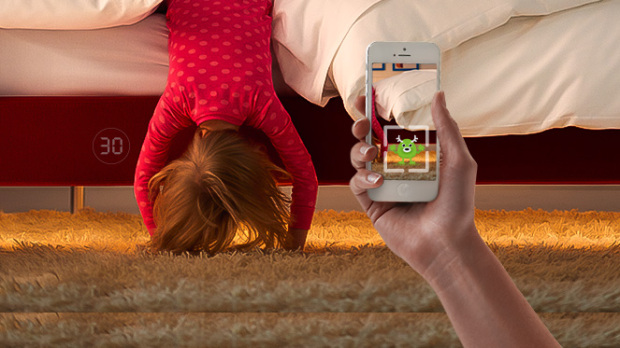 The SleepIQ Kids Bed starts at a whopping $999. That’s before some of the bells and whistles you’ll probably want, like a base or a mattress pad protector.

While I appreciate the technological wow factor, I can’t imagine spending that kind of money for a lot of features that a good sleep tracking app can provide.  I might even lend my Jawbone UP ($129) to my daughter or get her an UP Move with a wristband ($65), and see just how well that tracks her sleep. I’m also happy to make my own sticker chart, or use Kristen’s marble jar reward system, for consistent bedtimes. It’s not as cool as having all her data across a single app, but it does save me close to $500.

Now if you do have the money, and bedtime is a nightmare (no pun intended) in your home, I can see where a dedicated sleep system for your child could be appealing. Though I still want to wait and hear from real consumers who have actually used the KidIQ system after its launch to understand how well the sensors actually work, and whether the companion app does a better job than the sleep trackers available now.

I do know people who swear by their Sleep Number beds though, so maybe their mattress, plus your own, more affordable tracker, could suffice.

In all, I admit that for me, the features and functionality just seem overbuilt. Like a case of “just because we can make it…does that mean we should?” Also, while it would be nice to see if my child is flopping around more than she should be at night, I’d go nuts waking up to an alarm every time she gets up for a glass of water at 3 a.m.

One of the rewards of parenting kids past toddlerhood, is the glorious ability to sleep through the night. At least once in a while.

Visit  the Sleep Number Bed site for more info on the SleepIQ Kids Bed which is slated to launch sometime in 2015.