Dot and Dash robots: The best of what coding toys for kids can be 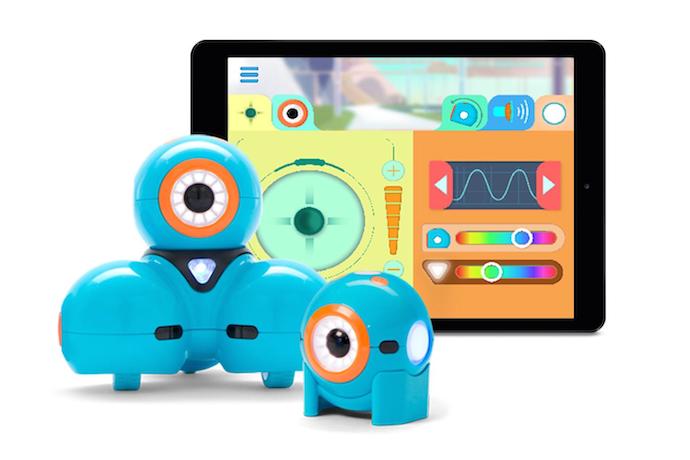 Walking through the crowded, cacophonic aisles of International CES 2015 earlier this year, we were instantly drawn to one booth featuring adorable little robots gliding around the rug, and beeping and booping at our feet. It turned out to be the Dash Robot from Wonder Workshop, which is everything that’s right about tech toys for kids.

Considering most coding toys tend to be strong in either the platform or the look of the toy (and generally the former), it’s so refreshing that Wonder Works has approached both as if they’re equally important; the apps are beautiful and intuitive, and the robot is just cute, with a colorful turquoise body and big friendly eyes.

It definitely feels like it was designed with kids in mind, as opposed to the tech industry.

The other thing kids will like, as will their cost-conscious parents, is that Dash is really designed to grow with your kids. There are four different free companion apps plus extra attachments that keep it fun and relevant long after other “must-have” toys are gathering dust.

Download the four beautifully designed  free iPad or Android apps (that means essentially Nexus or Galaxy tabs) starting with the Go app, which teaches some basic problem solving skills through basic, simple, visually-based tablet controls — the color of the lights, the flickering patterns, the way the robot moves. You’ll get the most precise and instantaneous responsiveness I’ve ever seen.

I mean, Disco (as my kids have renamed him) turns or spins or or waggles his head on a dime. Plus he has sensors to detect noise and objects nearby which could be pretty fun if you have a pet and reassuring if you have furniture legs that have yet to be ruined by offspring.

Even the sounds he makes are pretty great, though as with any toy that makes noise, I find myself telling the kids to turn down the volume and shut the door, oh…about five minutes in.

When kids are ready for more control, download the Path app (above) which jumps into basic programming. Kids can program their little robot friend to follow paths, and accomplish tasks to unlock additional abilities and sounds which thrills my girls. (What is it about that “unlock” icon that makes it an automatic must-do for kids?)

For older kids, the Blockly app is probably my favorite. It lets you really program him to do some neat things in really kid-friendly ways. In fact my second-grader picked it up right away, and created a program in which she claps twice and says GO! which sets him off on a sequence of fun actions, starting with looking toward the person who actually gave the command, before flashing his lights in a way she’s chosen, racing around the room and making jet fighter sounds whenever it nears an obstacle. Pretty cool.

When you have the the xylophone attachment, you can use the Xylo app which is all about music. As in, playing easy nursery rhymes, composing your own songs, and creating xylophone covers of pop hits. We haven’t tried that one yet, but sounds like a YouTube sensation waiting to happen.

Okay, I know that’s a lot. So, what do you really need?

Well, definitely Dash for starters. (It’s available through our affiliate Amazon with free Prime ship, yay!) Though I will say, that while it’s expensive, I would go ahead and consider the full Dot and Dash Robot Wonder Pack which comes with everything including building brick connectors, a tow hook, bunny ears, a fun smartphone mount (if you dare – that always freaks me out) and more.

You can always buy some of the accessories separately, like the Xylophone. Which clearly I want.

I really am impressed with how fantastic this toy is, and just how long it’s still keeping my kids’ attention. But I’m more impressed seeing my youngest daughter, who doesn’t have the coding experience of her older sister, jump right in and get excited about it.

It’s an investment for sure, but there’s another way to look at it: Should you have a preschooler, a grade-schooler, and a tween or teen in the house, like Kristen does, this is the rare toy that they’re all able to share and enjoy.

Well, provided they can share.  Sometimes that’s harder than coding.

Buy the Dash robot, the Dot and Dash set,  or the full Dot and Dash Robot Wonder Pack with all the bells (literally) and whistles, from our affiliate Amazon with free Prime shipping. You can also get more info online at the Wonder Workshop site.

Also be sure to  check if your device is compatible with the Wonder Workshop apps. Note that Blockly is a little limited in its function for Android at this point, and the Go app is the only to work with an iPhone; you’re best off with an iPad or a Galaxy Tab for full functionality.

Thanks to the company for providing a basic Dash unit for review.