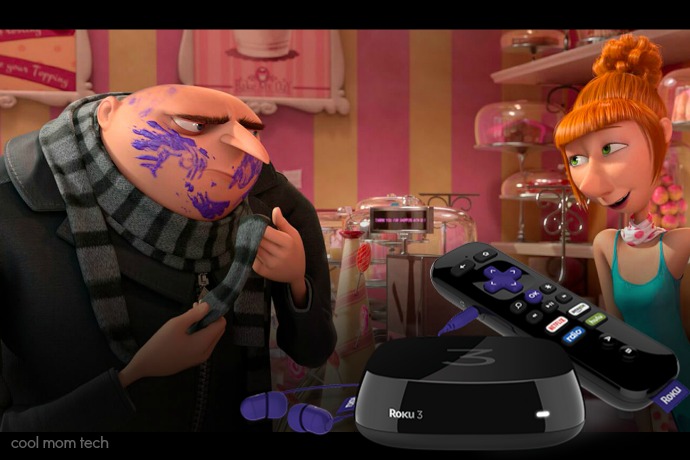 As an avowed Roku devotee — a word that’s hardly strong enough considering I’ve convinced most of my relatives to invest in one — I was excited to check out the new Roku 3 that just came out this spring. Let’s just say, they had me at “voice commands.”

And since today is National #StreamingDay (which, okay, whatever, I think Roku made that up)  it seems the perfect time to tell you why this is my favorite new device. Also because there’s a sweet discount on it, today only.

So of course the voice command function was the first thing I tried with my Roku 3 and wow, if only Siri worked so beautifully. You just hold down the search button on the remote, say “Game of Thrones,” and instantly you have global search results that let you know which season is on which channel, and where it is for free. Then, one of the things I love about the Roku nav, is that you select a season on a particular channel and it bring you right to that exact page. No extra clicking.

If you happen to dictate too many words (I first tried, “Game of Thrones season one”) the screen will direct you to say less to get the results you want. Saying less to get what I want is always good, as far as I’m concerned.

But here’s the kicker: You can also use voice search through the Roku Android app or Roku iOS app, which I love having anyway, should the Roku remote be missing, or the batteries zonk out in the middle of a crucial OITNB scene. Which happened once.

It was a very long two minutes.

In fact, the addition of this fantastic voice search service definitely puts Amazon Fire TV on notice, since that seems to be a key reason its subscribers like it. But there’s definitely a few other new features that make the upgrade to a Roku 3 considering if you have a previous gen device, or no Roku at all.

The retooled remote now has four dedicated channel buttons to take you right to Netflix, Amazon, Hulu and rdio, the latter of which is an interesting choice. The wrist strap is gone, but the remote still has the handy headphone jack which is a lifesaver for parents — or couples with one late night TV-watching fan and one “I need to go to sleep now, Honey.”

It also has more functionality as a gaming remote, but for my family at least, we tend to stick with XBox or PS4 for big-screen gaming.

The new Roku Feed feature is absolutely inspired and far more than what I was expecting. More than just a standard queue, it lets you add movies and shows that are coming soon (True Detective Season 2!), then alerts you when they become available for streaming, or even if there’s a price drop with an update.

There are also quite a few new channels in the lineup bringing the total over 2000; while most are of course channels you will have no interest in (as with all programming), a few notable additions include the new Sling TV which I reviewed yesterday; Google Play Movies + TV;  Twitch for gamers; NBC Sports Live Extra for live sporting events; and a GoPro channel which I’m mildly obsessed with.

Then, just today, Sesame Street Go was launched which is a $3.99/month subscription, and a fantastic option for families who are cutting the cable cord.

So yeah. I love the Roku 3. I won’t hide it. Every time the company makes a change, they just implement it so thoughtfully and seamlessly. And I think that voice search is going to give Amazon Fire TV a run for its money, considering that’s always been the unique feature that its fans tout the loudest.

Let’s just say after banging my remote fruitlessly for ten minutes to find a show on my TW cable TV lineup while it keeps reverting to channel 500 for no good reason, the smart, user-friendly nav of Roku’s interface and the outstanding global search across your channels becomes even more pronounced.  I’m kind of spoiled now. You’ll feel that way too.

Order the new Roku 3 for $99, but today only, May 20, get an additional $10 off any new Roku system in honor of #streamingday. You can even get it through our affiliate Amazon, for free Prime shipping.

Also check out the Roku Facebook page for a chance to win one of five different product including two Roku TVs. Sweet! Thanks to the company for sending CMT a unit for review.