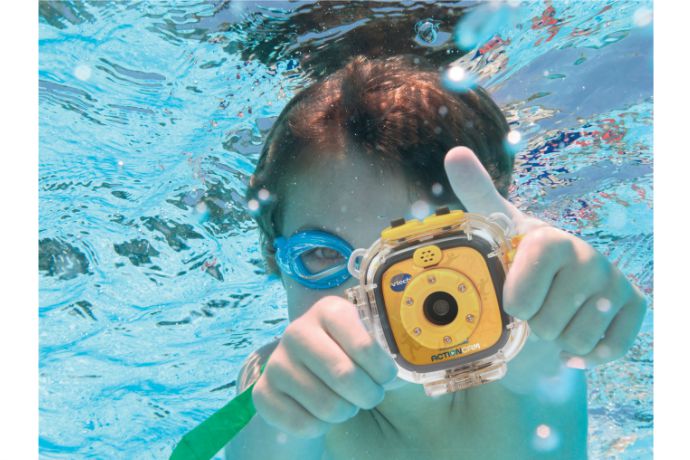 Ever since my husband showed the kids the GoPro videos he took while mountain biking, they’ve wanted to take the same kind of cool action videos, even if all they’re doing is riding a scooter down the driveway. And since we’re not so keen on handing over a $300 camera, I was intrigued to see that VTech has come out with the Kidizoom Action Cam (available at our affiliate Amazon), an action camera for kids that lets them make their own high-energy videos at a much more kid-friendly price.

Related: GoPro is for extreme sport enthusiasts. AKA parents.

My first concern was that “cheaper camera” would also equal “terrible quality” since kids don’t want to just make videos, they want to watch their creations as well. This is where I think VTech’s years of making kid-friendly cameras has helped them in making the Action Cam. I was pleasantly surprised by the clarity of the action once I had uploaded my son’s videos to my laptop, even if the sound is muffled or overtaken by the noise of wheels on gravel. It’s not GoPro quality but, at less than a quarter of the price, I’m okay with this.

VTech’s Kidizoom Action Cam also comes with everything your kids need to start making their own on-the-go videos. There are different mounts for their ride-on toys, an adhesive mount for a helmet, a waterproof case for submerging up to 6 feet, a wrist strap, and a Micro-USB cable for connecting it to your computer.

As the parent in our family with the least patience for “fiddling,” I found that this little camera is, thankfully, quite easy to use. It also seems durable and not too precious, which is a good thing since my son has already recorded an epic scooter crash in the driveway.

It may or may not have been intentional.

Even cooler, the Action Cam can even get wet once it’s snapped into the plastic waterproof case. I imagine kids will love watching–and rewatching–their cannonball jumps, or taking video of their friends swimming underwater.

While I do like the Kidizoom Action Cam for shooting action video outdoors, I don’t love it as much as a regular camera; maybe because my kids end up putting goofy cartoony frames and distorted effects on every shot which then end up downloaded onto my laptop. The self-timer and time-lapse photo recording features are nice, but the size of the ActionCam makes it feel more clumsy as a regular digital camera, and no flash means that indoor shots are likely to look grainy or blurry.

In other words, do not expect GoPro quality here. Not that you need it.

And, like other VTech kids’ cameras, there are a few video games built in to the camera. I wish they would have left this feature off since I’d rather my kids use their charge for filming, not playing games on a teeny-tiny screen. Also, it kind of defeats the purpose of the whole “getting outdoors and playing” aspect of the camera, but thankfully my kids don’t seem particularly interested in the games anyway.

But for aspiring young documentarians, or kids who just want to record themselves pedaling down the street or climbing a tree, the Kidizoom Action Cam is an affordable and fun tech toy for kids. Keep in mind that the maximum video length limit per file is 30 minutes, or under 2GB. But in fact, I find that my kids can’t last more than 2 minutes before needing to stop and re-watch what they’ve recorded.

The VTech Kidizoom Action Cam is available for under $60 at our affiliate Amazon. Please note that you will need to supply your own 32GM microSD card which is not included. Thank you to VTech for supplying an Action Cam for us to test.