How to use new Twitter Moments: Could it make Twitter a more quick and easy news source? 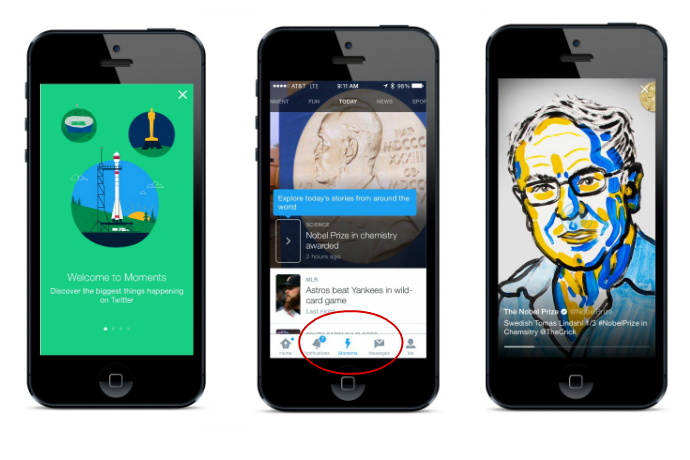 Notice a little lightning bolt icon at the top of your Twitter feed? No, it’s not a Halloween month tribute to Harry Potter. In an attempt to lure some new folks back to Twitter — evidently 316mm monthly users isn’t enough for some investors — and to keep those of us already there, there more often — yesterday Twitter introduced the brand new Twitter Moments feature, represented by that iconic bolt.

As in, quick, click here! Lightning is striking as we speak!

Don’t be mislead by the word “moments” which made me think, oh no…is this like Facebook moments, showing me some awful thing that a friend drunk tweeted ON THIS DATE 4 YEARS AGO.  Fortunately that’s not it at all. It’s more like…Twitter News.

Overall this is a new tab offering an easy way to check the top news stories, in a curated, magazine-y fashion, more like you might expect to see from Flipboard or Zite or even a Tumblr blog or a Pinterest board.

Related: The Pinterest feed changes: How to see more of what you want and why you’ll never see all of it.

Moments now appears at the bottom of your mobile device screen as a lightning bolt icon,
with stories that scroll like a visual timeline of links, tweets, photos and vines

Moments appears at the top of your scomputer screen as a lightning bolt icon,
with drop down menus beneath it by category

An excellent, comprehensive piece about Twitter Moments on The Verge offers a great summary:

“If it sounds like Twitter is now running a media company inside a technology company, that’s because it is. The company put together a team of curators…to package, organize and write editorial descriptions for every moment.”

Nothing supports that theory more clearly than a quick look at the updated app description in iTunes.

I notice that the first screenshots and descriptions of the service describe finding the best of Twitter in an instant, swiping through stories, and getting exclusive pics and conversations — all depicting far more visuals than ever before. Only in the fifth screenshot does it suggest Express yourself with a tweet, making it clear that chat and communication is secondary to news and information for the company.

Dead last suggestion? Find people and accounts that interest you.

So I have to beg on my knees to Twitter…please don’t let this be a slippery slope toward placing sponsored content so far ahead of user selected content that I lose all control. And please please don’t make the Moments so important that now a computer algorithm presumes to know what we care about, more than we know what we care about, the way Facebook and Pinterest have with their own changes.

Let’s keep it like the nice tab it is now, there when you want it, and avoidable when you don’t.

Because my Spidey sense tells me this is not just about getting in new users or recapturing lapsed users, like they say — though hey, maybe it is? I think it’s equally about creating opportunities for more sponsored tweets and brand-created curations in your feed.

Which isn’t always a bad thing.

In fact, this could be a great way to create native content for advertisers. I bet the NFL would do something really cool around the start of football season; or that TOMS would do a fantastic job curating articles around a particular issue they’re now addressing with their giveback program.

Like below, here’s a fun moment around Twilight’s 10th anniversary. HBO could have easily sponsored this, and Twilight fans would love it.

We’ll have to see where that goes.

Now my initial thought is that Twitter Moments could be truly fantastic for busy parents. I realize that I tend to use Twitter like a news resource anyway, checking in first these days — yes, even before the traditional news networks — when I hear about breaking news or want an assessment of how a big discussion topic among opinion leaders and those I follow.

I even realize I typed in “fireworks NYC” Sunday night to verify that those those booming sounds out my window were nothing to worry about. Within seconds, hyperlocal sources calmed me down. Yay Twitter!

So it makes sense that Twitter amps up its role as a news aggregator. Moments really does make it easy to click on a topic of interest, then see that curation of 10 or so stories that bring it all together.

I also notice that visuals play a much bigger role, which isn’t so bad, except in my old school view, seeing animated GIFS and lots of vines piled on top of one another makes me want to run away from the clutter. I think the stills are far more effective, at least for me.

“Moments” like yesterday’s creation of the World’s biggest peace sign, includes a collection of stories in graphic form with links to different sources. As seen on the Twitter.com site.

On the other hand, curation as a whole has inherent biases (like when we curate, we’re biased towards cool stuff, ha) and Twitter for me has always been fairly democratic, for better or for worse.

I can see what’s trending; what top tweets on a topic or hashtag determined by popularity or even within my network; and then I can choose to click on news about any given topic from the news network or independent publisher or blogger of my choice.

With Moments, the collections are currently created by partners like Bleacher Report and MLB for sports; BuzzFeed for Fun; Entertainment Weekly for Entertainment; and news comes from everyone from the NY Times to Fox News to Getty Images. The idea is that the partners evolve into a place of curating collections of moments, and not creating them.

Which is good, because if I want to see everything Buzzfeed thinks is “fun” it’s easy enough to just follow @buzzfeed, right?

Will you see what you want to see?

I wonder if Twitter is aiming to know what I want to see in terms of these four Moments categories —  or maybe, like the cover of any paper or magazine, they’re just going for the broadest user base. Obviously those possibilities are endless, as you know if you’ve ever tried to select a favorite category anywhere from HuffPost to Stumble, but are we going to be limited to the current four categories?

As tech author, professor and speaker Rafranz Davis put it:

Hey @twitter Moments would be awesome if they were personalized to meet my interest. Where’s your “education” tag?

We are totally in a personalized social media on demand world, and Twitter could potentially jump on that in a great way.

Then again,  I suppose we could all say hey, where’s the crafts? Where’s parenting? Where’s home and garden? Where’s technology? Where’s fashion? And then….poof. We’d be back on Pinterest. With more GIFs.

This is where the entire thing all became clear to me; with a curated story about Neil Degrasse Tyson that I found under “Fun.” It’s a great curation of Tweets around the hashtag #WhenIWasYourAge that he started on his birthday yesterday.

It was really a treat to look at the best of his own Tweets, mixed in with some other folks who had great ideas to add. That alone helped me see how easily Moments could potentially let you drill down into a topic of interest beyond a single link and get a broader picture — and how this functionality is different than just a collection of links around a news story.

And at the end of a Moment, of course, you can see how you have a chance to share the entire series by tweeting a single link: twitter.com/moments/xxxxxx. It is social media after all.