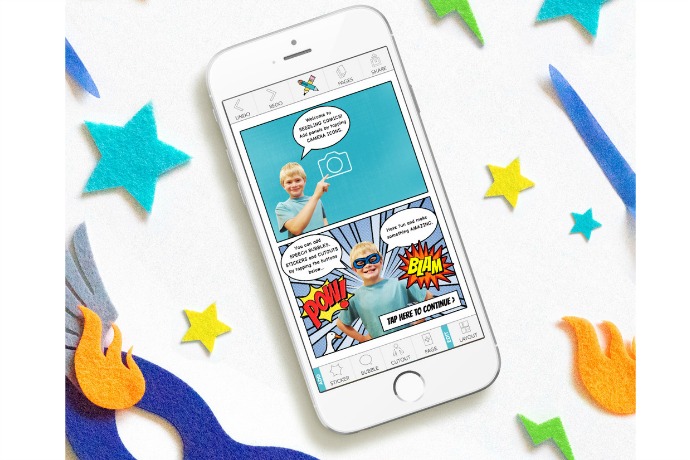 If you’re tearing through the list of snow day activities to keep the kids occupied when you’re stuck indoors, allow us help you with two beautifully designed, really fun new apps we’ve discovered from Seedling. As in, the same company whose affordable craft kits we’ve turned to for gifts and projects many times.

While there’s no need to stock up on craft supplies with these apps, they are both super creative, imaginative, and pretty much free.

If your kids like to make up stories, download a copy of Seedling’s Comic Studio for iOS, and they’ll be putting together their own comics in minutes. I love how easy it is to add pages, change the layout, or to add photos, speech bubbles, cool graphics, and backgrounds so they can see the ideas in their heads transformed onto a page.

While, yes, there are in-app purchases for additional graphics or styles, there is so much here that is free, that most of your kids should be perfectly fine with what’s provided. And if not? Well, if it’s inspiring a ton of creativity then those add-ons could be a few dollars well spent.

If you want to get involved in the process, you can even ask the kids to create a comic starring you as the superhero (aren’t we parents already superheroes?) then get ready to pose for lots of action shots.

Also get ready to laugh at what story your kids create around them.

Whether the kids are getting restless indoors during a snowstorm or you just want to get them off the couch for any reason, Seedling Scavenger Bingo is such a fun app that will have kids running around looking for items to photograph to fill up their bingo cards.

With different free themes like Around the House or Big City or Nature Walk, you can adapt their hunt to your location. Or, select the Alphabet game which will have them searching for items that begin with different letters on the card.

(I will just say I might skip the Supermarket game since I can just see my own kids tearing down the aisles in an effort to get the photos they need. Clean up in Aisle 7!)

One thing that is very cool about this app is that it can link players together via Bluetooth so you can all play the same game against each other, racing to see who will finish first. So gather up the devices in your home, because  you can have some kids holding an iPod Touch, mama with her iPhone, and still others with an iPad all in the same game.

However I do wish there was a way to “x” out incorrect photos after a person completes their game card, for those who use a bit too much…creative license in their photographs in an effort to finish first. Like when I took a photo of my bare wrist for “watch” because that’s where I’d wear a watch. Hey, I was so close to winning!

Seedling offers nine different games for free. You’ll have to spend $.99 each to get additional locations (airport, camping, beach, zoo) which seems a bit steep for a single game, but may be worth the one-time, add-on cost if you’ve got a 7 hour layover in Minneapolis.

There are also location-specific games for that same fee for tourist destinations Chicago’s Navy Pier, San Francisco’s Fisherman’s Wharf, or the National Mall in DC which I love. I’d play those more as a collaborative game instead of a competitive game though, since you really don’t want your kids taking off toward the Jefferson Memorial without you in search of a clue, right?

And finally, for a couple of dollars, you can purchase the “Make Your Own Game” option, creating clues that are as wacky and specific to your own family as you want.

I’d say, choose clues that insure your kids will have to run up and down the stairs multiple times to complete their card. You are, after all, trying to burn up their extra energy, right?