The new Polaroid Snap Touch with LCD: Is this insta-digital hybrid camera worth it? 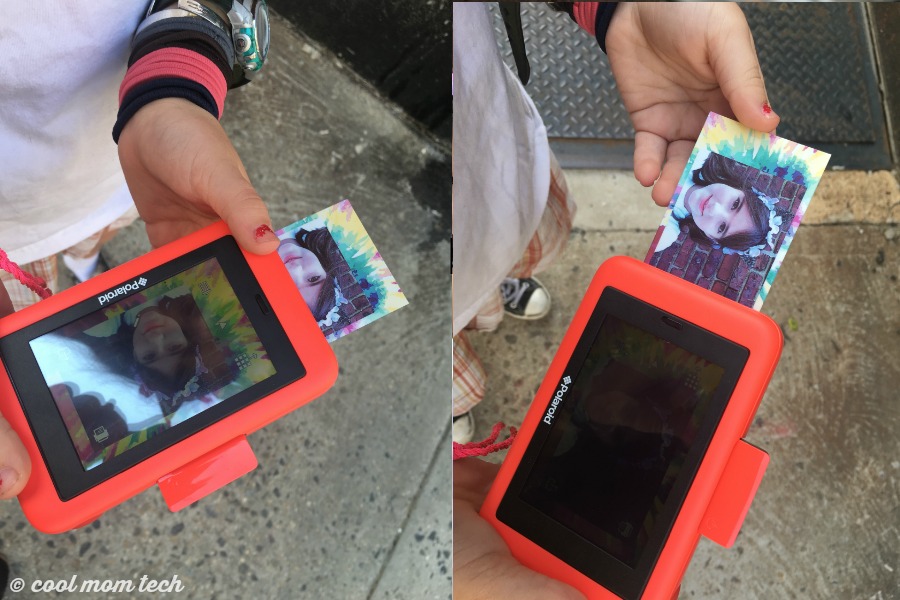 After spending some time playing around with the new Polaroid Snaptouch ($179.99 from our affiliate Amazon) that we were sent for review, I think it’s a fun little camera for a family — especially with road trips, summer camp, and more outdoor time ahead.

That said, there are a few caveats I want to offer.

It didn’t take too long for my 9 year old to figure out how to use the touch screen to take, save or trash a photo; then play around with digital effects like borders, type, and a few sticker options before printing.

And showing off to every person we passed on the street. 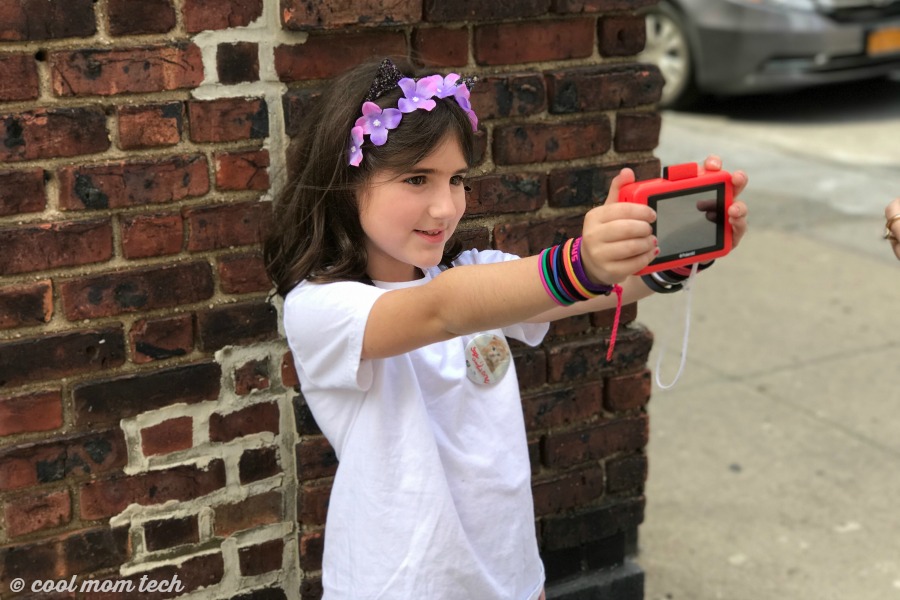 My daughter, happily volunteering to test the Polaroid Snap Touch with zero complaint.
Then never give it back. Ha.

That said, the UX is…just okay.

Oddly, it’s not super intuitive at all, so I had a little trouble figuring out a few basics at first. Like the shooting star icon means filters (huh?), the page icon means stickers although it looks like it should be “print,” and then there’s not really great menu nav, so you’re never quite sure where you are in the process. Like, you have to hit a back arrow button to exit out of the editing tools instead of just being able to print directly from there.

For that, you have to press and hold the view screen to find the printer.

But all that said, once you get used to it, it’s definitely a treat to play around with.

Some features really are fantastic. Like, it’s super cool to be able to photograph multiple photos sequentially then print in one frame, Lomocam or photobooth style. Great way to give each kid a shot while saving film.

Related: 5 terrific pro photography tips for kids who want to get beyond selfies

Taking a selfie. Always a selfie

Adding filters or changing to black and white within the camera: Great feature

Adding filters (the tie-dye is her fave because, 9 year olds) and silly stickers like glasses. As you can see, you can rotate and move them around the frame pretty easily.

The self-timer is not a feature you tend to see on instant cameras, and it’s smart for selfies that you can actually be in with your kids. And the kids love the ability to shoot HD video, though TBH, any smartphone will yield better results.

But the respectably large LCD screen — even though the resolution isn’t what you’re used to with your phone’s own screen — really is nice to have for any point-and-shoot at all. But if you do want to save a bunch, you can get the original Polaroid Snap Touch without LCD screen on Amazon for just $99.

Related: 8 tips for getting the best selfie with your kids

Here it comes! Clearly we didn’t want to wait to print it digitally

I particularly like the ability to convert your photos to black and white or sepia before you print; and it’s a brilliant move to allow you to add the colorful borders at will — or not — unlike the Fujifilm Instax which requires you to buy dedicated film for that purpose. (As I well know from multiple summer camp care packages filled with the stuff.)

That ingenious feature really puts a big point in the Polaroid column if you’re considering other instant options.

But the best part is the fact that this is both a digital camera as well as an instant one. You can store 128G worth of imagery on the micro SD card then print on the instant film digitally, at will with a Bluetooth-connected phone and the iOS or Android app.

I like that for those times that my kids — or I — run out of film but still want to grab a great shot.

Then again, if you’ve got kids, they’re not going to want to save anything to print later, as long as you’ve got film to spare.

Related: How to take better Instagram photos of kids

Unretouched and unfiltered photo of the finished product. Not bad!

And hey, speaking of that instant film: The Polaroid Zink (i.e. Zero Ink) film happens to turn into stickers with an adhesive back. That’s in part what makes this so terrific for kids.

That said, I do wish that for the price, the Polaroid Snap Touch felt like a better value.

It is great fun, no doubt. And you’re paying a premium for that LCD screen so you need to decide if that’s worth it.

If the price comes down a bit, it will definitely be a more viable option for more families who want the fun and instant gratification of an instant film camera, coupled with some of the editing, storage and printing functionality of a digital cam. So keep an eye on those Amazon deals. I’m sure one will be here in no time.

Find the new Polaroid Snap Touch camera for $179.99 from our affiliate Amazon right now and check out the 6 cool colors! Thanks so much to the company for sending CMT a unit for review consideration.

All photos © Liz Gumbinner for Cool Mom Tech; first photo in post by Jon Armstrong. Please do not copy, use or repost without permission.