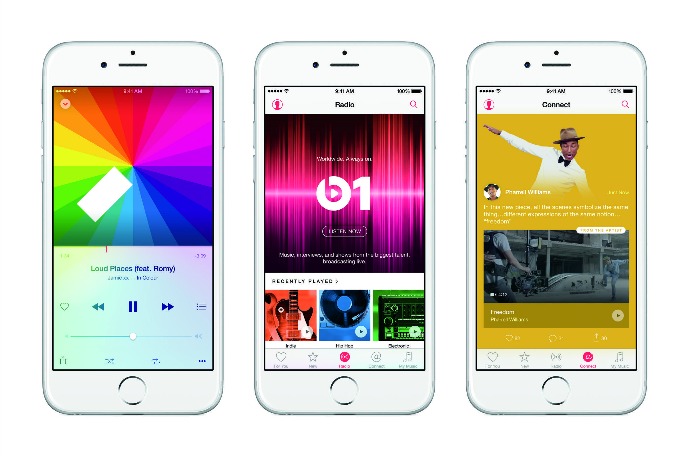 Plenty of coolness was rolled out at Apple’s World Wide Developer Conference this week, and we’re here to share the intel with you that we think parents will care about most. And yeah, non parents too. The biggest news is that Apple iOS 9  is coming this fall (along with OSX, or El Capitan) and it’s bringing more intelligence with it.

Also, hold on to your hats, music fans, because Apple is jumping into music streaming game with the potentially Spotify-killing Apple Music.

Of course as parents, we always ask ourselves not whether the technology is innovative and capturing the attention of the tech community, but how does it affect us? How will it make our families’ lives easier? Will it save us money? Will it help us get more sleep? You know…the standard stuff parents think about.

So, with that in mind, here are the top 4 things we think you need to know about Apple’s latest announcement.

This is pretty major. Starting June 30 — with an Android version coming in the fall — Apple Music will be available for all iOS users, free for the first 3 months. After that trial period, you can choose an individual plan to get your favorite music and podcasts (ahem) streaming for $9.99 per month; or,  for a better value, go for the family plan that covers up to 6 people for $14.99. It also gives you access on all your devices, including Macs, PCs, the Apple Watch should you have one, and even any Android devices in the family.

This feels like Apple’s taking a direct aim at Spotify’s Family Accounts sharing feature, which offers just a two-person subscription package for the same $14.99. Because so many families have just two people in it.

Related: 3 reasons you may want to become a Spotify Premium user

As with Spotify, you can opt to skip membership altogether and instead just listen to Apple Music’s free Beats 1 radio (above). But that means putting up with limited skipping and all those “delightful” ads that interrupt your music flow. With an Apple Music membership however, you will also be able to download albums and playlists to play offline.

Another huge bonus for those of us with a zillion kids’ apps taking up space on their devices: Your whole iTunes library will live in the cloud, saving much more space for the latest Toca Boca app.

Of course we want to see what’s up with the new Connect feature that allows you to comment on and interact with anything the artists have posted themselves. It could be really cool; or it could be another YouTube commenter free-for-all which is not always our favorite thing for kids.

Oh, and one more cool add with Apple Music is the Siri integration. You’ll be able to ask her to play a particular artist (hello, kindie music world!) or a specific song;  or you can give her a more general request like, Play the top 10 songs from 2008 to celebrate your daughter’s birth year at her party, and Siri will dig up those hits for you.

2. Apple’s Siri Gets Even Smarter

Every parent who has ever used Siri because it was easier than typing while juggling a toddler (or her many, many things) in the other arm knows the value of voice dictation. But now it goes one further.

The overall theme with the new Siri redesign seems to be proactive assistance. This means Siri will figure out what information you need and automatically suggest helpful apps, people to contact, or actions to take, like when you should leave for your appointment based on weather and traffic conditions. Whoa. This is all based on your usage patterns — often before you even start typing.

The upgraded version in iOS 9 will have Siri giving you contextual reminders and better ways to search photos and videos,which parents can always use, too.

This iOS 9 version of Siri will give you more relevant answers to your questions, as well as give you the latest sports scores, and even calculate simple math problems for you, like if you want a quick way to split the lunch bill three ways.

Siri can also learn what songs you tend to listen to at a certain time of day, like when you’re at the gym or shuttling the kids home from soccer practice, then automatically play your jams the minute you plug in your headphones or start up the car at the end of the day. That’s kind of amazing if it works well.

Basically, this new Siri is faster, smarter and better. I think of her as The Bionic Siri.

Related: 10 cool things Siri can do for you

We all use maps like, all the time, right? Finally, Apple is improving their Maps app with a Transit view with metropolitan transit directions for buses, subways, trains and even ferries, plus public transit schedules and subway station entrances and exits precisely mapped out, giving you truly turn-by-turn directions. Sounds a lot like HopStop app, doesn’t it? That’s precisely because Apple acquired HopStop — one of fave road trip travel apps — two years ago, and this is the brilliant result. We approve!

For now… We’ll need to put this thing to the test. Of course.

We’re also looking forward to trying out the new Nearby feature on on the upgraded Maps app. Use it to quickly scope out what’s close in terms of restaurants, stores and activities. Definitely handy when rocking around the city with your kids in tow, and you need a child-friendly restaurant in like the next 14 seconds or else.

(Now if only they could add the Charmin-created Sit or Squat Restroom Finder app to the Nearby feature …  Can I get an Amen?)

The new Maps app will launch first in New York City, San Francisco, Baltimore and Washington, DC; and internationally in Toronto, London, Berlin, Mexico City, Beijing and Shanghai, with more cities rolling out later. We imagine a lot more cities, if this is as good as it looks.

Related: 4 of the best free road trip apps to help you stay safe on the road

4. Apple’s Newsstand Gets Revamped into ‘News’

To be honest, my main reason for using Apple’s Newsstand on my iPad is to keep my magazine clutter problem under control at home. It’s helped for years, too. I no longer have stacks of The New Yorker, or Entertainment Weekly creating a glossy and dangerous wall around my side of the bed. They’re all in my iPad’s Newsstand.

However, I have yet to use the app on my iPhone, and have  wondered if Apple was going to do something to improve it. Well, I got my answer this week: Yes.

Apple just introduced the News App, its brand new, free newsreader. There’s talk that the original Newsstand is about to become, well, old news. From what I’ve read so far, the News app will not only look prettier, with a rich design, but it will also let the reader customize the news stories they see in their feeds which is a huge bonus. Apple says the News App will combine the “immersive” feel of a print magazine with the interactivity of digital media and we’re intrigued.

A neat new feature: the app will learn your interests and then suggest relevant stories (kind of like Zite), then make it easy to share that content over social media. This sounds like a terrific idea for parents who are already juggling enough spread over limited time, and would rather just get to the local political news, sports scores, or the Game of Thrones recaps, and skip over the topics they don’t care about. (No offense to the Kardashian fashion watchers.)

No word on when the new app will launch, but a few big-name print companies, like The New York Times, BuzzFeed, ESPN, and Condé Nast have already signed on as content partners. Sounds like good news to me.

We’ll update with more news as we get it — like, tell us about the new phone coming in the fall, Apple! — and keep an eye out for a full review when iOS9 is ready for download. We can’t wait!