Our favorite Santa apps that make the magic even more magical. 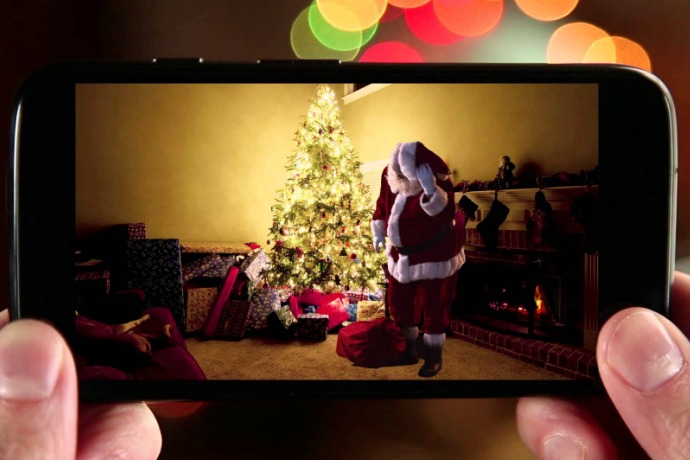 We’re big fans of Santa around here, as you might have guessed. What, us risk making the naughty list? Never!) So if you’re looking for some fun Santa apps to help bring the big guy to life on your phone, tablet, or laptop and make believers out of any kid at all, we have quite a few options for you from some mainstays to some very fun new entries.

Related: 8 of the best fun Christmas apps for kids

Personalized Call from Santa from Google

So far, our favorite app of the year is right on your laptop. Leading up to the big day, you can arrange a Call from Santa — or at least a voicemail message — courtesy of Google, for all the people on your nice list.  You personalize it, Mad Libs style with so many fun options (Dear Alexandra / Little Angel / Dude / Schmoopie / Geek / Brother from another mother…) that you’ll want to make a ton of them. In fact, our Liz says her kids and their own friends have spent the entire last four days sending them to everyone in their class. It’s easy to send via email (so you can see the adorable guy above), or even voice call if you type in a phone number. Or download an MP3 of the audio file or just create a share link. (Free website)

We covered the Google Santa Tracker last year and back in 2013, and happily recommend it again. However don’t let the URL deceive you, for this is no mere tracker. It’s more like an interactive advent gaming calendar, where you’ll find 24 wonderful little games, a new one unlocked each day. It features videos, charming interactive games like Elf Jamband and Santa Search, and all kinds of interesting educational info, like a map with Christmas traditions around the world; and a wonderful ornament coloring page called Season of Caring which describes cool technology around the world to help differently abled people.

On Christmas eve though you’ll definitely want to check in on the tracker. That’s where you’ll find real-time updates on the man with the bag, or download the Google Santa Tracker Android app for tracking on-the-go. Either way, it’s fun to show the kids pinpointed, ever-changing GPS locations of Santa’s whereabouts on Christmas Eve. Even we keep our eyes on this one on the 24th. (Free website, app also free at Google Play)

For years, we’ve all been impressed with how well-made and magical our kids’ experiences with Portable North Pole have been. It’s definitely more realistic and less silly than Google’s offering; when Santa pulls a book off his bookshelf with your child’s name and photo in it, the kids are absolutely convinced. However it’s important to note there are quite a few changes to the free app which now has far fewer features; in fact some parents complain that kids can’t see if they’re on the “nice list” unless they pay for the app — which could be a little disturbing for a child. We say spend the $2.99 (a little more if you want to be able to save it) , which also lets you avoid a banner that pops up reading, “free kids’ video.” Oof. Not that we blame them for wanting to make some money off a very good app that’s become a tradition for a lot of families. (Free but not really; web, iTunes or Google Play)

If proof is what kids want, proof is what you can give them with the Kringl app. Take a shot of your living room with the tree all lit up, then place the overlay of Santa right in your room, follow the instructions to scale him to size and match your room’s own lighting and voila! Pretty realistic. Videos don’t lie, right? The perfect way to bring a little more magic to Christmas morning. Also, it’s now available for Android users too. Just be warned…adults can uh, have their own fun with Santa with this one too. We’ll let your imagination go with that one. (Free on iTunes, Google Play)

If the kids will be waking Christmas morning anywhere aside from their home, and they’re worried that Santa won’t find them,  Reroute Santa to the rescue. This is a cute and very basic new entry from Home Away that lets kids know that yes, Virginia, there are presents coming your way.  Simply type in your child’s name, where you live, and where you’ll be on Christmas morning.  Santa will provide a letter confirming, in a fairly generic way, not to worry because he’s got you covered. Don’t worry about privacy issues; there’s no data exchanged here and your locations can be as generic as “Grandma’s house.”  (Free, web app)

While it’s definitely fun to have all these extras, my personal tried and true for Santa tracking has always been NORAD (The North American Aerospace Defense Command). They’ve been tracking Santa on Christmas Eve for 60 years (!) and the app takes advantage of highly sophisticated technology to help us all track Santa’s every move. They do monitor our airspace, after all. This gives kids real-time access to where St. Nick been and where he is heading.

One note though: On Christmas eve, either stick with this one or the Google Tracker. We read 2014 reports from parents that they offered different locations at the same time which could definitely make kids wonder what’s going on. Of course the answer we’d give as parents is: Maybe he’s getting here sooner than expected. Better get to bed NOW!  (Free on iTunes  and Google Play; check the NORAD Twitter feed for updates as well.)

This post updated and revised from a post originally published 12/14, with contributions from Kate Etue, Christina Refford and Jeana Tanhk.