Cut the Rope 2 review: It is here. Oh yes it is. Don’t even pretend you’re not interested. 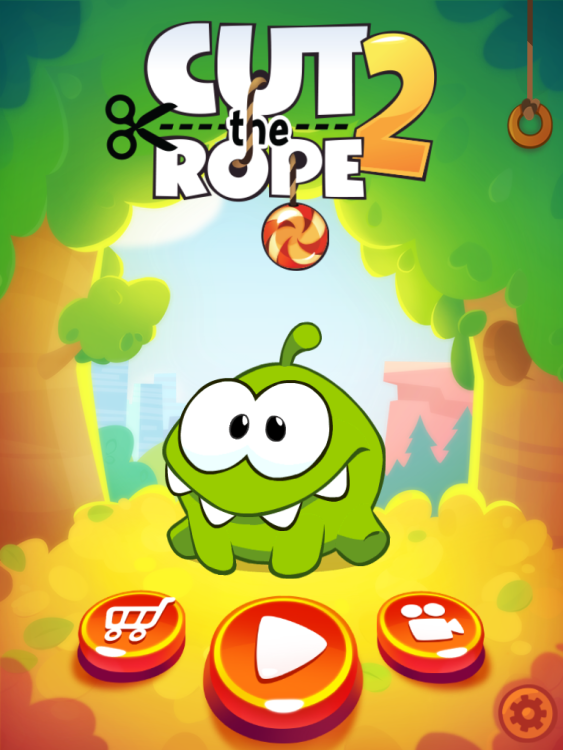 Thanks to Cool Mom Tech, our family iPad is packed with cool apps and fun games. While a few franchises like Angry Birds and Toca Boca do a great job with new releases, lightning doesn’t strike more than once for every developer. So I was thrilled for a chance to do a Cut the Rope 2 review.

Let’s just say I’m stoked to see that old favorite Cut the Rope can now count itself in that small club with its fourth release.

Cut the Rope has to be one of the cutest apps ever, and Cut the Rope 2 is just as awesome, with Om Nom finally out of that box. You’ll find new characters, new worlds, new rewards, 120 new tricky challenges to master–all with a soundtrack that doesn’t have me hollering at the kids to put on headphones, unlike many other kids’ apps (cough…Talking Tom…cough).

And while I can’t classify Cut the Rope 2 as an educational app, I do love that the physics of it helps teach kids about actions and reactions.

One big caution for parents: Watch out for in-app purchases. They are pushed heavily in Cut the Rope 2 as a cheat to pass a tough level–and there are quite a few of those–which is kind of a bummer, especially with a paid app. While Apple is now on the hook to ensure that it’s crystal clear when an in-app purchase is being made, I’m thinking about little kids who may not fully get it (or care either). Regardless, be sure to kid-proof your phone or tablet and turn off in-app purchases.

(Do you really need all those extra Candy Crush lives yourself either? Probably not.)

If you have to get your kids past a level yourself, so be it. Other than that your kids will probably be as obsessed as mine: conquering levels, collecting candy, and cracking up at Om Nom. Delicious.

Find Cut the Rope 2 by Zepto Lab for $0.99 for iOS on the App Store. Android version coming soon to Google Play and Amazon.