Build a neighborhood with Toca Builders. 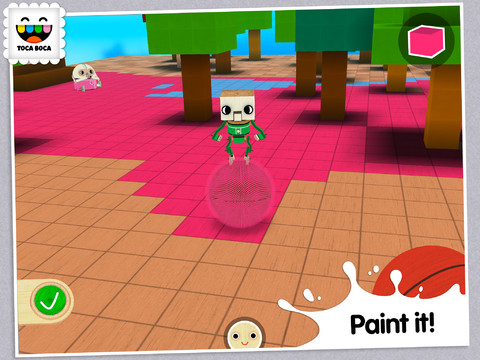 Dropping, smashing, stacking, painting–Toca Boca‘s newest app for kids, just out today, encourages kids to do them all, and I’m excited as much as my kids are. Really. Our actual playroom walls could use a break.

While all Toca Boca apps encourage creativity and curiosity–that’s why they’re a Cool Mom Tech fave–I really didn’t think plain old building blocks would keep my two all that interested.

Toca Builders is no mere building blocks at all; it’s intuitive, digi-cool, and surprisingly addictive. Simple drags and drops control 6 builder friends that do everything from shoot spray paint from a straw, to pop blocks out of a backpack.

One bummer: An autosave feature is supposed to leave everything right where kids left it so they can continue adding to their creations, but so far, it hasn’t worked. My son discovered the glitch, and after an hour of serious play, he was very disappointed to find that his blocks had disappeared faster than the pita chips and hummus he stopped to snack on. That said, Toca is amazing at updating quickly and I’m sure it will be fixed in no time.

As a quick fix, use the snapshot feature which makes it easy to capture a photo of your kids’ construction right on your camera roll. Don’t worry, as with all Toca apps, your kids will be doing plenty of that on their own.  -Pilar

Download the brand new Toca Builders app for iPhone, iPod Touch or iPad for $.99 on iTunes.

For more Toca apps we love (LOVE!), check out our reviews of: