Smartphone addiction: 5 things I learned when I put away my phone around my kids for a week 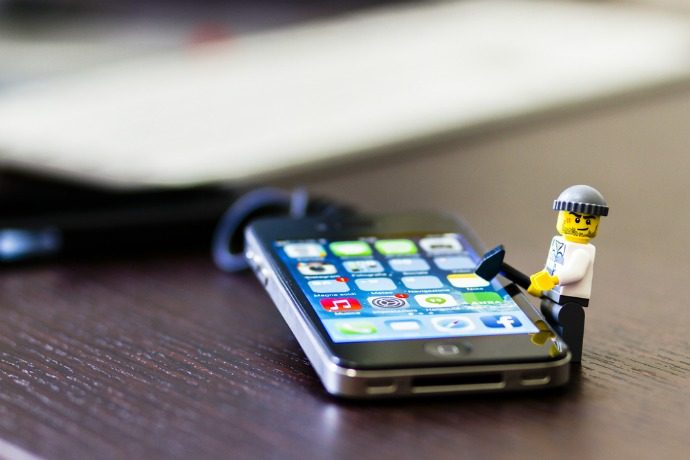 I’ve often wondered if I’ve had a bit of a smartphone addiction, seeing as how my iPhone often functions as my third arm. Or second brain. As a busy work-at-home-mom who runs her own business, my smartphone allows me freedoms that I wouldn’t otherwise have, like running to the doctor’s office mid-day, or volunteering in my kids’ classrooms. Even when I’m home alone for a few days, my smartphone keeps me connected to my community of faraway friends — not to mention it’s my music player, my camera, my calendar, my GPS…you know the drill.

A smartphone really, truly is a parent’s lifesaver.

But as we all know, a smartphone can also be a huge distraction when our attention is needed elsewhere. And really, I know that I’ve been setting a bad example for my kids when I have my face buried in my own phone while telling them to put theirs down.

So I decided to take extreme measures as an experiment, and completely put my phone away for an entire week, whenever I was around my kids.

Related: Tips and tricks to make your phone less distracting without turning it off

When you look at it, that’s about five to seven hours total each weekday, and seemed like a reasonable goal that would still allow me to be present for my job, which isn’t your typical 9-5. In other words, I could still jump back online after the kids go to bed to finish up any work that didn’t get done after they came home.
Here’s how it worked, and what I learned from the whole experience that I hope will help you decide whether you need a little smartphone addiction intervention yourself.

I decided to put my phone aside in the mornings before my kids headed to school at 9AM; and then again from about 4 to 8PM when they were home and awake.

I alerted my friends and colleagues to my plan, telling them that I would be available by text and email during business hours, but if they needed to urgently reach me during my smartphone black-out times, they would need to actually call (rather than text, email or message me on social media). Kind of like the old days.

The plan was only to take calls; I would wait to respond to all emails and texts later in the evening.

What I Learned From Putting Down My Smartphone

Lesson 1: You can have a problem without actually being addicted.
As they say, the first step to recovery is admitting you have a problem. Was I addicted to my smartphone? I’d say no. I didn’t feel any sort of weird physical symptoms or no-phone-related panic (I hear that’s a thing), but I realized I was certainly very attached to it beyond its specific work and personal uses.

For the first couple of days, I felt like I had nothing to do with my hands — something ex-smokers might be able to relate to. I’ll also admit, I’d walk by the location where my phone was plugged in and think about just a quick swipe to see what was going on in the world. I even (sort of) cheated a couple of times and pressed the home button just to check for notifications. Ahhhhhh.

I probably could have used the kSafe.

Curbing my smartphone habit while losing a few pounds?

Thankfully by day three, I was in the habit of not checking, and feeling perfectly fine just leaving my phone alone. I could even turn on Spotify for music and step away without stealing a look at Instagram, Twitter, or Facebook — a big move for me, all things considered.

Related: 10 questions parents should ask when writing a cell phone contract for kids

If there’s one huge thing that I discovered doing this experiment, it was that all the flipping and clicking and swiping was an absolute time suck. By not checking my smartphone at all, I ended up with so much more time to spend with my kids. I cooked dinner. I prepared school lunches for the next day right after dinner. I played LEGOS, I watched their terrible shows with them (ha).

To be fair, there’s nothing wrong with technology time sucks — I can go down the Zite or Flipboard or blog-reading rabbit hole with the best of them — but I’m trying to save my time sucks for when I actually have time for them.

One way I’m trying to frame it, which helps, is that my kids’ awake hours are the time that they need my attention more than Lady Gaga does on Instagram.

And guess what? My kids totally noticed the extra time I had for them. And it was a really good thing, for all of us.

Related: Screen time during the day is affecting your toddler’s sleep at night

Lesson 3: You’re not missing out on anything important. Even if it feels like you are.

To be honest, there was no FOMO with me, though I do know that’s often a concern of a lot of people, either consciously or not. But in putting my phone down for those hours in the day, I never once felt like I had missed anything, whether it was important news or silly social media events or even the long group texts my friends and I can get into.

I was perfectly fine and happy to learn about those things later on in the evening — or when it comes to Facebook’s algorithm, the next day.

I also figured that if there was huge breaking news that would impact my business or that I really needed to know, someone would call me about it.

Lesson 4: You’re being sucked into minutiae.

Over the course of the week, I felt like I received fewer texts and notifications, at least from friends and colleagues who I told about my experiment. It could be that I just don’t get a lot of texts and notifications during those times anyway, but also that they were trying to be respectful of my boundaries.

Surprisingly, the lack of texts was actually reassuring. Because unless I had received an actual call, I knew that life was generally okay out there. (See also: #3.)

There’s a huge relief you feel when you don’t get pinged and dinged with those things that, in the long scheme of things, are minutiae. That’s in no way meant to diminish communications from important people in my life, colleagues, or clients. But think about it: Everything seems equally important when it’s coming through your phone in rapid-fire fashion, and it creates this urgency to respond immediately, even if just to say, “ha! Funny picture!”

Remember when cell phones were just cell phones? Maybe I need a kids’ cellphone like this.

Turns out, I can read that interesting article or comment on that cute photo later. And while you can certainly set different ring tones and notification sounds to help you differentiate between friends and say, a sick relative, in some ways, just forcing people to call you when they truly need you will significantly cuts down on the noise.

Related: 8 smart ways parents can manage screen time and not lose their minds

Lesson 5: You might be relying on your phone to do too much.

As much as I’ve praised the smartphone for making life easier for parents, and will continue to do so, there’s another side to it. When there’s one gadget for pretty much every single thing in your life, from communicating with teachers to looking up a recipe to liking a social media status update, it makes it hard for parents to live without it.

I have to admit that I don’t love having level of reliance on anything.

In other words, it’s too easy for us to pick up our phones to snap a photo or a video of our kids, then get sucked into a social media notification, or respond to a text that then becomes a ridiculously long interaction. Now look at all the precious time you’ve just lost, simply because you set out to take a picture.

So while your smartphone can be a valuable tool to help get you reading more if you’ve got the Kindle app on there, helps you find your way around when you’re lost, and conveniently doubles as your music player, be aware that those conveniences also make putting it extremely difficult to simply put your phone away.

This may not work for everyone, but it’s perfect for me: I purchased an iPad, then pulled most of the apps off my phone so its main function can be…well, a phone.

I personally left my social media apps on my phone because I need to be able to check them for work. However now games, music, books, apps and movies are all on my iPad which significantly eliminates the distractions, or the temptation to dive into the Internet. This turns my smartphone back into an actual phone again, and not my third arm.

Plus I’m trying to keep up with my phone-free hours with the kids, and my call-in-case-of-emergency rule. I know I won’t always be able to do it, but I really feel the difference in my life. Not just as a parent, but as super busy person who realizes that multi-tasking can mean I’m not doing a lot of things well at once, but rather, a lot of things not-so-well at once.

I’m still getting work done, I’m still saying hi to friends on Facebook, I’m still responding to urgent work calls. But I’m also spending a lot more quality, individual time with my kids, which was something I felt was sorely lacking in my life.

And I actually have more time for myself too–to think, to read, to just be–which is important to me too.

Do you have trouble putting away your smartphone? What kinds of boundaries do you set for yourself? We’d love to hear your own experiences and tips.