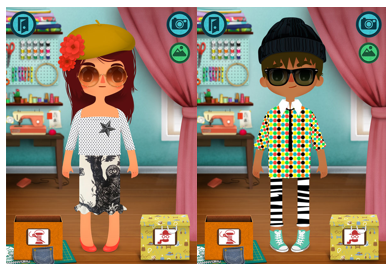 Time to make it work!

Toca Boca, our favorite Swedish app developer is at it again with Toca Tailor, their newest release that makes kids the head of their own design house.

[don’t miss a limited time discount on this app!]

In Toca Tailor, four characters–two human and two animal (as in Toca Hair Salon)–are ready and waiting to be dressed up or down in creative, crazy outfits cobbled together from a mix of 24 different prints, patterns, colors and fabrics. There are 24 detail options including everything from buttons to bows to skulls, plus 30 cool accessories like sunglasses, necklaces, fascinators, hats, hi-tops, and mustaches.

Lord knows you can’t have a hip app without a mustache these days.

Plus get this: a built-in “fabric camera” lets kids snap a photo of anything around them to turn into a unique clothing print or pattern, and anything saved in your device’s camera roll can be used, too. Grass pants? Dog hair shoes? Done and done!

Everything can be matched, mismatched, rotated or adjusted in any configuration your kids can come up with, and even hems, sleeves and styles can be shortened or lengthened. And, since Toca Boca never imposes time constraints or point systems, budding designers can take their time
getting those finishing touches just right.

Of course because all kids will love every masterpiece they create, a snapshot option also lets them take a photo of their creation using any real-world background as a background, from their bedroom, to a city rooftop or park. In other words, one day you’re in, the next day you’re out. -Pilar

Download Toca Tailor on iTunes for iPhone, iPad and iPod Touch and get it at a special introductory price of just $0.99 this week only!