The new Toca Mini app: It’s a small world after all. 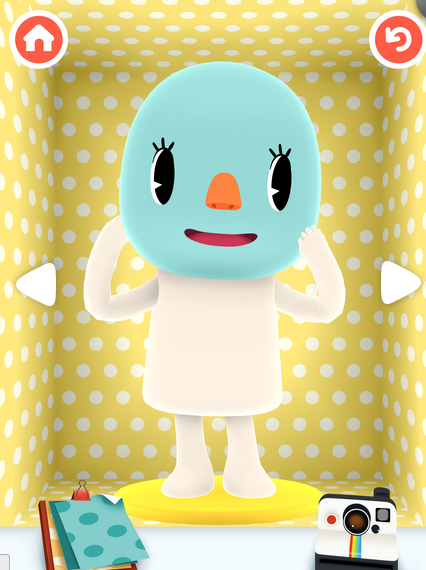 Cute? Funky? Funny? That’s entirely up to you in this new colorful world from Toca Boca, one of our favorite developers of kids’ apps, and it’s all created with kids’ wild imaginations in mind.

Toca Boca just released its latest iOS treat, and it’s sure to make your kids smile. Because I’m already smiling and according to my two, I’m ancient. (I prefer “young at heart.”)

In Toca Mini, kids are given a blank “figurine” that they can customize to make unique fantasy friends. Ombre-striped, kewpie-eyed superhero? Mustache-tattooed, flower stamped friend? Done and done.

To start, kids simply tap their Mini to add colors, stripes, and even colorblock “pants” if the spirit moves them. A color wheel automatically pops up to provide a rainbow of options–60, actually–along with a lot of colorful backgrounds for the Mini’s “box.”

Intuitive and easy to use, I’d say it’s perfect for kids about 4 and up.

They can choose from 78 reversible stamps, from waggly eyebrows to curliqued hair, and through the whole process the Mini makes the silly getures and approving sounds we’ve come to know and love in other Toca apps.

There are no time limits, scores to keep, in-app purchase options or pop-up ads; all reasons why Toca Boca is a CMT favorite. Which means Toca Mini is another opportunity for kids just get to do what kids do best: play. -Pilar

Download the brand new Toca Mini for iPhone, iPod touch and iPad on iTunes for $2.99.